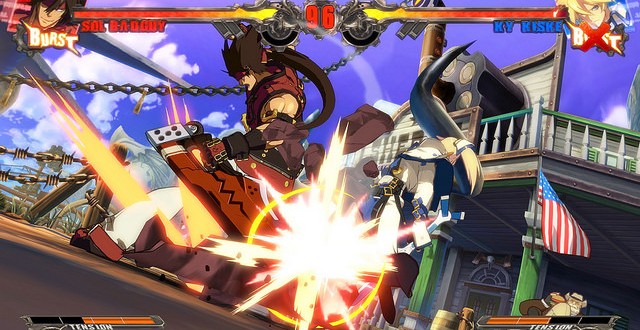 Guilty Gear Xrd -SIGN- lands this December in the US, official trailer released

PlayStation gamers will be thrilled about this one: Frank “Bo” deWindt II, director of production from Aksys Games just announced on the official PlayStation blog that Guilty Gear Xrd -SIGN- will be coming this December 16 in the US, on PlayStation 3 and PlayStation 4. Seems like Guilty Gear fans will have an extra well-deserved pre-Christmas present. The Guilty Gear series has been fighting its way into players’ hearts for 16 years now, and this upcoming sequel was redesigned from the world of 2D to encompass both 2D and 3D elements, so that the refined eyes of seasoned PlayStation gamers can be enchanted by this brand new look. This was possible thanks to some Arc System Works magic and the Unreal 3 engine.

Guilty Gear Xrd -SIGN- director explains that “3D models have been fashioned to create the illusion of 2D sprites without anyone being the wiser.” The game will be also featuring enhanced fighting mechanics, taking a huge leap from the series’ pioneer mechanics system, the Roman Cancel. Now, players will be able to enjoy a tone of new fighting styles to fiddle around with. In terms of the character roster, a lot of familiar faces will be present in this new Guilty Gear title, from the notorious Sol Badguy and Ky Kiske, two beacons of the Guilty Gear franchise, all the way to “someone as cute and adorable as the Jellyfish pirate, May!” Among some of the new names to be making their appearance we’ll find Bedman – a sneaky character stuck to a bed and fighting from the comfort it provides, and the lovely Ramlethal Valentine  – a proud possessor of a couple of swords that can do some serious slicing and dicing when used properly. Catch a glimpse of the official Guilty Gear Xrd -SIGN- trailer.

Recently, two additional characters have been announced, Sin Kiske, “who employs the power of lightning as well as a flag to battle his foes, and the lovely and pure Elphelt! But beware of her arsenal of guns! She’ll give a whole new meaning to the term, “Shotgun Wedding”.” Elphelt will be a DLC character. Pre-orders for Guilty Gear Xrd -SIGN- are now available, and both PS3 and PS4 versions of the game will have standard and limited editions. US fans who will go for the limited edition will be enjoying a few surprises: “The limited edition will contain a box to hold all the goodies, fashioned in the likeness of the “Backyard”, the Guilty Gear Xrd -SIGN- Vocal Collection (just like the Japanese version!), the Guilty Gear Xrd -SIGN- Character Book which will provide information on characters, terms, and concepts from the beginning of the series to the present, and finally, the Sol Badguy “FREE” belt buckle keychain!” December will be soon knocking at our door with this new classic action fighting title.

I'm Razvan, a sports and first-person shooter enthusiast. I've always loved writing, even more so when it involves games. When I'm not playing on my PS3 or writing, I like to run exhausting cardio workouts, play soccer, watch a good movie, or read a good book.
Previous What to expect in Battlefield 4 Final Stand
Next Android 5.0 Lollipop vs iOS 8 – upgrades and improvements