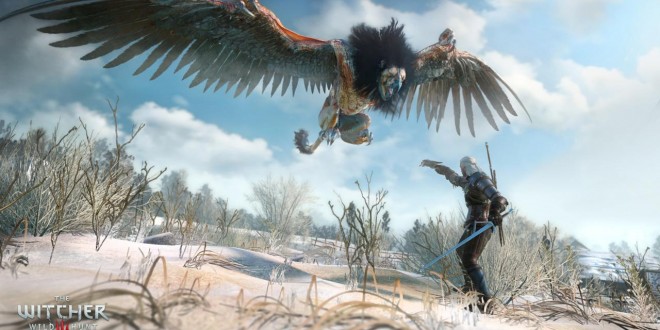 The Witcher 3’s opening cinematic coming to the Golden Joystick

Renowned independent Polish developer CD Projekt RED has just announced The Witcher 3 Wild Hunt’s opening cinematic will debut at the upcoming Golden Joystick Awards ceremony, which takes place on the 24th of October. Tune in at 15:45 BST to be among the first to watch Geralt of Rivia following ‘The Trail’ (I assume that’s the trailer’s name), which foreshadows The Witcher 3 Wild Hunt’s main events. CDPR has also announced Wild Hunt has been nominated in the ‘Most Wanted’ category, which shouldn’t surprise anyone. If you haven’t cast your vote yet, you can do so [here].

The Witcher 3 Wild Hunt concludes the story of the witcher Geralt of Rivia, the series’ protagonist, whose story to date has been covered in the previous versions. Continuing from The Witcher 2: Assassins of Kings, the ones who sought to use Geralt are now gone. Our protagonist now seeks to embark on a new and personal mission, whilst the world-order itself is coming to a change. Geralt’s new mission comes in dark times, as the mysterious and otherworldly army known as the Wild Hunt invades the Northern Kingdoms, leaving only blood-soaked earth and fiery ruin in its wake; and (unfortunately for Geralt) it seems the witcher is the key to stopping their cataclysmic rampage.

The Witcher 3 Wild Hunt was officially announced on the 4th of February 2013 via Game Informer, with a 2014 release on PC and “all high-end platforms available”. The latter was then clarified to mean the PlayStation 4 and the Xbox One on the 21st of February, 2013, and June 10th, 2013, respectively. According to the official information from Microsoft, The Witcher 3 Wild Hunt was originally not going to be available on the Xbox One in Poland, the country where the game’s development process is taking place. However, this has recently changed as regional restrictions have been entirely removed from the Xbox One.

I’m Load The Game’s co-founder and community manager, and whenever I’m not answering questions on social media platforms, I spend my time digging up the latest news and rumors and writing them up. That’s not to say I’m all work and no fun, not at all. If my spare time allows it, I like to engage in some good old fashioned online carnage. If it’s an MMO with swords and lots of PvP, I’m most likely in it. Oh, and if you’re looking to pick a fight in Tekken or Mortal Kombat, I’ll be more than happy to assist! Connect with me by email markjudge (@) loadthegame.com only
@@MarkJudgeLTG
Previous Samsung breakthrough in battery technology
Next Darksiders 2 is now free for Xbox Live Gold members via the Games with Gold program