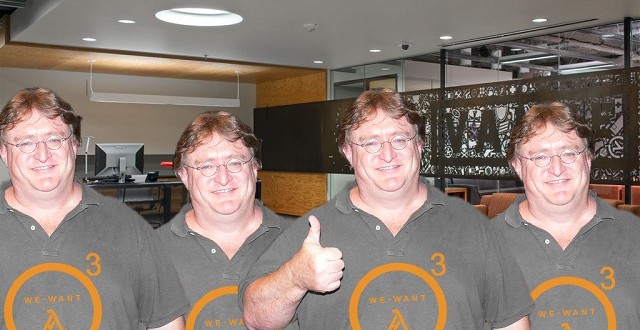 It’s pretty safe to say that Half-Life 3 is one of the most highly anticipated games of all time, but will we ever see it? Rumor has it that Valve has silently released the Source 2 engine and is currently testing it using the Dota 2 Workshop Tools Alpha. Moreover, it would seem that Dota 2 is slowly being ported to Source 2, although Valve has yet to confirm this. In any case, we expect the company to announce a very important game when it finally decides to make the engine official. That game could very well be Half-Life 3 seeing as how Valve doesn’t seem to have any other titles in the works at the moment. Speculations aside, a couple of die hard fans of the series have banded together a couple of days ago and started a crowdfunding campaign aimed at convincing Valve to finish and release Half-Life 3.

This isn’t any old campaign however as the ones who came up with the idea have a pretty solid battle plan in mind. The campaign entitled “We want Half-Life 3” has an end goal of $150.000 and plans to use the money in a number of creative ways that should draw Gabe Newell and Co.’s attention and let them know just how much fans want to play this game. The first milestone is $3.000 and the money will be used to create a Google AdWord advertising campaign that will target all 300 Valve employees and present them with the message “We want Half-Life 3”. At $9.000, the creators of the campaign will rent a truck with a giant billboard featuring the very same message, which will then “besiege” Valve’s HQ in Bellevue, Washington.

Then, when the $45.000 stretch goal is reached, a bunch of Gabe Newell look-a-likes will be hired to enter Valve’s headquarters while wearing “We want Half-Life 3” T-shirts. The madness won’t stop there though as at $150.000 a huge concert will be organized in Seattle and all Valve employees and fans will be invited to attend. The campaign was started by two employees of a marketing firm called McKee Wallwork & Co. and they say that the whole firm is backing up this idea. To prove they’re serious about convincing Valve to release Half-Life 3 the two have already created a trailer in which they explain exactly how the campaign will work. You can read all about their devious plan and chip in to the noble cause on IndieGoGo. Also, make sure you check out the campaign’s trailer below.

I’m Load The Game’s co-founder and community manager, and whenever I’m not answering questions on social media platforms, I spend my time digging up the latest news and rumors and writing them up. That’s not to say I’m all work and no fun, not at all. If my spare time allows it, I like to engage in some good old fashioned online carnage. If it’s an MMO with swords and lots of PvP, I’m most likely in it. Oh, and if you’re looking to pick a fight in Tekken or Mortal Kombat, I’ll be more than happy to assist! Connect with me by email markjudge (@) loadthegame.com only
@@MarkJudgeLTG
Previous Upcoming PS4 2.0 update has a lot in store
Next iPhone 6 pros and cons, addressing the new flagship