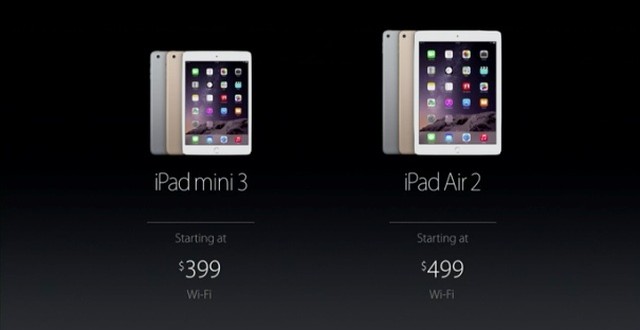 Apple made a number of important announcements yesterday during its press event in Cupertino. For the last couple of months we’ve heard rumors saying that the company will announce the iPad Air 2 along with the iPad Mini 3 sometime this Fall. As fate would have it, the rumors were true and Apple did indeed announce the devices yesterday at the said event. Earlier today the company also made both tablets available for pre-order from the Apple Store. The iPad Air 2 and iPad Mini 3 will begin shipping next week so it’s a good idea to make a reservation beforehand in order to ensure that they don’t go out of stock like the iPhone 6 and iPhone 6 Plus went back when they were announced.

I’m Load The Game’s co-founder and community manager, and whenever I’m not answering questions on social media platforms, I spend my time digging up the latest news and rumors and writing them up. That’s not to say I’m all work and no fun, not at all. If my spare time allows it, I like to engage in some good old fashioned online carnage. If it’s an MMO with swords and lots of PvP, I’m most likely in it. Oh, and if you’re looking to pick a fight in Tekken or Mortal Kombat, I’ll be more than happy to assist! Connect with me by email markjudge (@) loadthegame.com only
@@MarkJudgeLTG
Previous Moto X (2014) available for only $50 at Verizon for a very limited time
Next Nexus 7 and Nexus 10 removed from the Google Play Store, Nexus 6 and Nexus 9 added