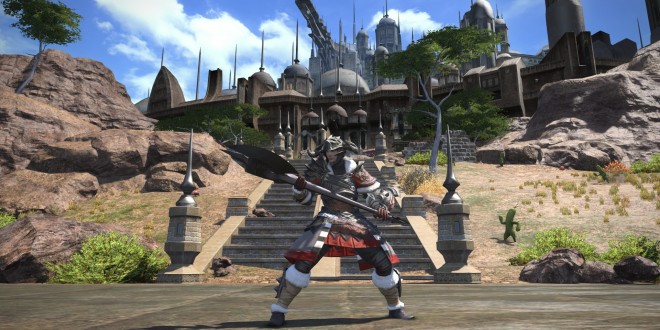 Publisher Square Enix has revealed the first expansion pack for its massive multiplayer online title, Final Fantasy XIV. Called Heavensward, this first major content update (currently without a price) focuses on the Dragonsong War, which is a thousand-year conflict between Ishgard and Dravania players will have to end. Final Fantasy XIV’s director Naoki Yoshida has also announced Heavensword is part of an upcoming 3.0 update, which raises the level-cap to 60, introduces new Primals, dungeons, high-end raids, and jobs. Additionally, the expansion includes a new race, though the director still keeps it a mystery. Finally, with Heavensward, players will be able to build airships in order to explore “Ishgard and beyond”, in addition to huge new open-ended areas. Square Enix plans to further reveal Heavensward at the upcoming London Fan Festival on October 25th.

Final Fantasy XIV is the 14th game in the Final Fantasy series, and the second after Final Fantasy XI to be a massively multiplayer online role-playing game. Final Fantasy XIV takes place in the fictional land of Eorzea, just before the Seventh Umbral Era, an apocalyptic event heralded by the descent and potential impact of the lesser moon Dalamud. Players create and customize avatars who participate in the affairs surrounding the impending invasion by the Garlean Empire and its relationship to Dalamud’s descent. The various nation states of Eorzea reestablish their Grand Companies and form an alliance to prepare for the coming war with the Empire.

I’m Load The Game’s co-founder and community manager, and whenever I’m not answering questions on social media platforms, I spend my time digging up the latest news and rumors and writing them up. That’s not to say I’m all work and no fun, not at all. If my spare time allows it, I like to engage in some good old fashioned online carnage. If it’s an MMO with swords and lots of PvP, I’m most likely in it. Oh, and if you’re looking to pick a fight in Tekken or Mortal Kombat, I’ll be more than happy to assist! Connect with me by email markjudge (@) loadthegame.com only
@@MarkJudgeLTG
Previous Why Lords of the Fallen isn’t coming to last-gen consoles
Next Report – Limbo coming to the Xbox One