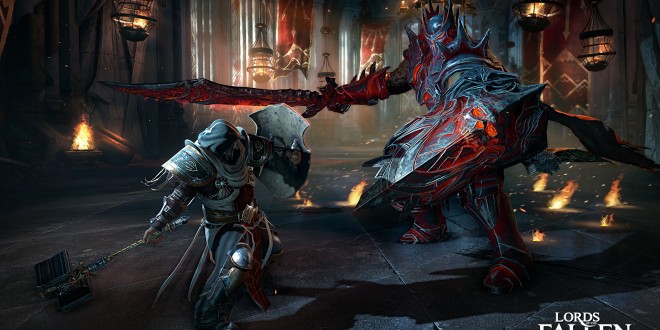 Developer Deck13 has recently explained why its upcoming hardcore role-playing title – Lords of the Fallen – is not gracing the PlayStation 3 and Xbox 360 consoles. In a recent interview with Worlds Factory, graphics and engine programmer of co-developer Deck13 Michele Giacolone has revealed that Lords of Fallen was initially scheduled for the last generation consoles (and PC), though the developer has quickly decided to move up the proverbial ladder in order to achieve the desired performance for the game.

“We had to find our definition of next generation in terms of visual quality and scene complexity with basically no experience with the new hardware”, explains Giacolone. “This was a crucial phase because we had to base on that the new guidelines for artists and designers, affecting the whole content creation process. The more we progressed with porting our engine to the new consoles, the better we could adjust those guidelines trying to find the right balance of visual quality, scene richness, and performance. Moreover, in order to achieve the best performance on the new hardware, we decided to not maintain back compatibility with DirectX 9 and previous generation consoles”.

Lords of the Fallen is an upcoming hack and slash action role playing game developed by German game studio Deck13 Interactive in collaboration with Polish studio CI Games and published by Bandai Namco Games. The game is set in a world where no sin is forgotten. Players take on the role of Harkyn – a convicted criminal whose sins are visible on his face, in the form of runes. The world’s rulers are working to banish all evil from humans, though it is unclear what exactly this might mean for someone like Harkyn. When an army of long defeated gods attacks the human realm, Harkyn is released from prison with a chance at redemption. Along with his mentor – Kaslo – the journey to stop the attacks leads to Rhogar: another dimension inhabited by demons. Players can form alliances as they progress, combat enemies of ever increasing difficulty, and eventually travel to the heart of the demonic realm, in an effort to achieve forgiveness for the game’s anti-hero.

Lords of the Fallen launches on October 28th in North America and October 31st in Europe, on the PlayStation 4, Xbox One, and PC.

I’m Load The Game’s co-founder and community manager, and whenever I’m not answering questions on social media platforms, I spend my time digging up the latest news and rumors and writing them up. That’s not to say I’m all work and no fun, not at all. If my spare time allows it, I like to engage in some good old fashioned online carnage. If it’s an MMO with swords and lots of PvP, I’m most likely in it. Oh, and if you’re looking to pick a fight in Tekken or Mortal Kombat, I’ll be more than happy to assist! Connect with me by email markjudge (@) loadthegame.com only
@@MarkJudgeLTG
Previous iPhone 6 vs Galaxy S5 – bang for buck
Next Final Fantasy XIV’s first expansion – Heavensward – revealed

Lords of the Fallen: PS4 vs Xbox One graphics comparison

Lords of the Fallen’s creative director Tomasz Gop has recently confirmed that the Xbox One ...