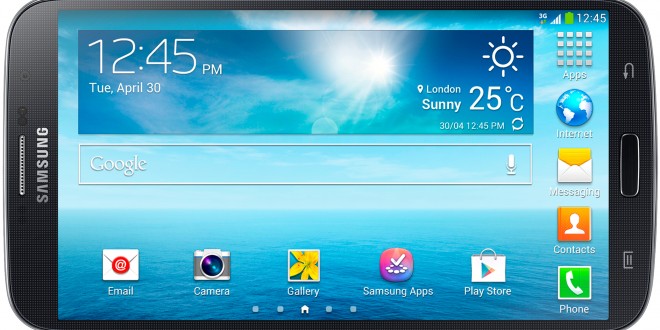 Being the successor to last year’s Galaxy Mega, the Galaxy Mega 2 sports a slightly smaller, 6 inch 720p display. The Galaxy Mega 2 specs include a quad core 1.5 GHz CPU, backed by 1.5 GB RAM and 16 GB internal memory, expandable via microSD card. The Galaxy Mega 2 camera is an 8 MP rear shooter with LED flash and a 2.1 MP selfie-camera. The Galaxy Mega 2 runs on Android 4.4 KitKat, with the usual TouchWiz UI that brings a one-handed mode, private mode, dual windows, ultra power saving mode. You will get a 2800 mAH battery in the device, which should make for a day or so of mixed use.

Samsung has had enormous success with the new Galaxy Note 4 and Galaxy Note Edge. The Galaxy Note 4 is praised for its great screen, fast charging and long-lasting battery life, while the Note Edge brings a hanging screen to the picture. The Galaxy Mega 2, on the other hand, is a mid-range device which doesn’t bring anything new to the Samsung portfolio, save for the large screen real estate. While the phone is a bit pricey, we are curious to see how it will be performing in the long run. The Galaxy Mega 2 will have to face competitors like the innovative Sharp Aquos Crystal which has just been launched and you can get it for $150 contract-free, and it sports similar specs to the Galaxy Mega 2.

My life-long dream has been to test out every gadget on the market! Considering the fact that I've rapidly destroyed almost every gadget I've had so far, I'm not inclined to owning something, so my ideal outcome would be to have a different gadget each month. I'm really into smartphones, wearables and tablets and I love Playstation and Xbox, I'm sure I'll beat you at your own game (after a month of training... or two)
Previous Oppo N3 might sport a fingerprint scanner
Next Alienware Alpha vs PS4 vs Xbox One: Graphics showdown