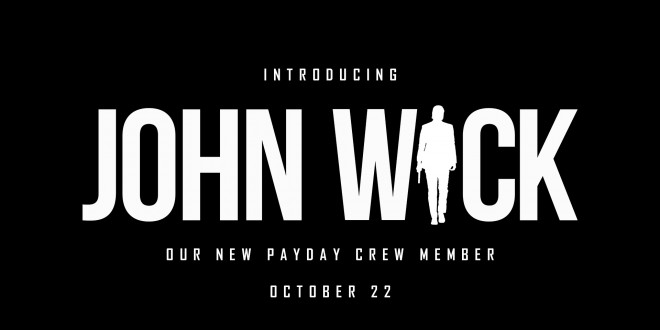 Starbreeze announced a partnership with Lionsgate and Thunder Road to include John Wick, the titular character from the upcoming Keanu Reeves movie, in an exclusive Payday 2 DLC.

The John Wick DLC will be launched tomorrow, the 22nd of October 2014, while the movie premieres on October 24th in theatres worldwide. The pack contains the John Wick character, which will be playable and will join the Payday gang. Additionally, the DLC contains the new Hitman perk system, which includes, amongst others, the ability to dual wield weapons. You will also receive a new pistol and a knife. Last, but not least, the pack includes three customizable sunglasses.

The DLC will be released on Steam, marking an important milestone. This is the fact that the Payday 2 Steam group reached 1.5 million members. Furthermore, beginning tomorrow, those who purchase movie tickets from Fandango will receive Payday 2 for free on Steam. Both Lionsgate and Starbreeze commented on this partnership, expressing their motivations.

Lionsgate EVP of Digital Marketing Danielle DePalma states the following: “We’re big fans of PAYDAY 2 and the team at Starbreeze, and we’re thrilled to kick off our partnership with such a cool movie. The hyper-real action sequences in the film almost make you feel like you’re watching an insane video game, so we cannot wait to see John Wick in theaters as well as experience him in the game.” Strarbreeze CEO Bo Andersson Klint, in turn, reveals another reason why the publisher releases this DLC. “We continue working with great partners, this time with Lionsgate and their movie John Wick,” he says. “We’ve finally got a real hitman on our team. Being able to play as John Wick in PAYDAY 2 ahead of the movie’s release is a great reward for our loyal PAYDAY 2 community, which reached the final milestone of 1.5 million members in our PAYDAY 2 Steam group before our 12-day Crimefest event.”

So far, the John Wick movie was praised by the critics, receiving a 100% score on Rotten Tomatoes and, even more surprisingly, a 9.3/10 average score on imdb (of course, this will change once the film hits theaters worldwide, but still, this comes from nearly 1000 ratings). It remains to be seen if the movie retains its ratings after October 24th and if fans will love playing as John Wick in Payday 2.

I'm a journalism graduate and an occasional gamer. As a kid I used to own a NES clone called "Terminator 2", which was hugely popular in my country. I like old school games and adventure games but I occasionaly play RPG's and Shooters as well, though I wouldn't call myself an expert at these kinds of games. When I'm not writing or playing games I prefer reading detective or fantasy novels.
Previous The Elder Scrolls Online and Skyrim are getting their very own book series
Next Why Assassin’s Creed Unity would be “impossible” on last-gen

You can now play ten great games on Steam at no cost whatsoever as part of ...