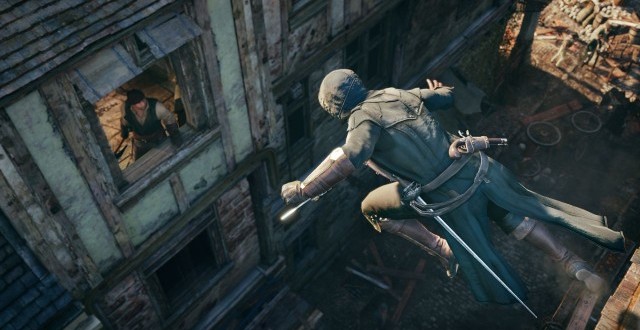 Ubisoft currently has plenty of projects going on, with each of them being more impressive than the last. Assassin’s Creed Unity is one of these projects and it’s looking to be the best installation in the franchise to date, which is saying a lot. The company has been promoting the game extensively ever since E3 2014 and lately we’ve even heard that Assassin’s Creed Unity will “create a new jolt” and revolutionize the gaming industry.

In an interview with the Examiner, Assassin’s Creed Unity Creative Director Alex Amacio talks about the good old days when the original Assassin’s Creed was seen as being innovative because it was able to support 200 people on-screen at once. “When we did [the first] Assassin’s Creed, I remember we had 200 people on-screen,”Amancio said. “It was revolutionary. It had unbelievable interactive crowds you could actually move through. As we iterated in other games, that became less and less impressive because everybody else caught up. [Unity] is a chance to sort of take that back and create a new jolt through the industry.”

Times have changed a lot and now there are many games out there that can manage this feat. In order to impress us once again, Ubisoft needs to take it one step further with Assassin’s Creed Unity and it looks like that’s exactly what they’re planning to do. This time around the company aims for thousands of people rather than a couple of hundred, but Amacio is also aware that there’s only so many you can put before it becomes uncomfortable. “We were aiming for thousands,” Amacio explains. “How many? We didn’t know because when we began working, we didn’t have the exact specifications for [the PlayStation 4 and Xbox One]. Actually, they didn’t exist yet, not even the specs. The idea of aiming for thousands and ending up with over 5,000, it becomes uncomfortable at some point because there are too many. It becomes a nuisance rather than something great. You really need those open spaces, and the [new generation] of consoles really gave us the chance to do that.”

Assassin’s Creed Unity will be available for PC, PS4 and Xbox One starting November 11.

I’m Load The Game’s co-founder and community manager, and whenever I’m not answering questions on social media platforms, I spend my time digging up the latest news and rumors and writing them up. That’s not to say I’m all work and no fun, not at all. If my spare time allows it, I like to engage in some good old fashioned online carnage. If it’s an MMO with swords and lots of PvP, I’m most likely in it. Oh, and if you’re looking to pick a fight in Tekken or Mortal Kombat, I’ll be more than happy to assist! Connect with me by email markjudge (@) loadthegame.com only
@@MarkJudgeLTG
Previous LG G3 will upgrade to Android Lollipop soon
Next Lenovo Yoga Tablet 10 hands-on review