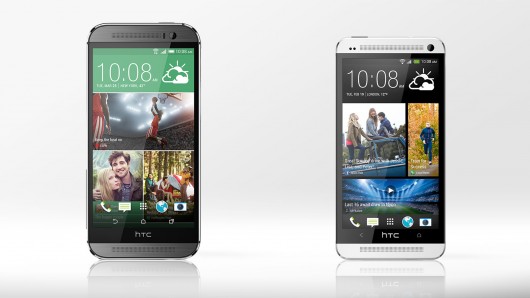 HTC has already released the HTC One M8, this year’s flagship, but that doesn’t mean that its predecessor, the HTC One M7 isn’t worth a look. We are going to compare the specs, design, price and features of both the One M8 and One M7 in order to see if the upgrade is worth or if the One M7 is good enough to rival current flagships on the market. HTC has also launched a selfie-variant of the HTC One M8 and the HTC Desire Eye, as well as the cheaper version of the One M8, the One E8. We will see how the HTC One M7 sizes up to its successor and what kind of bang for buck ratio it offers us.

Currently, you can get the One M8 for approximately $600 unlocked, while the One M7 price is around $400 for the unlocked version. While the One M7 is last year’s flagship and was released in February 2013, it still remains one of the favorite devices of smartphone enthusiasts. The HTC One M8 is the current flagship of the company and it has been praised for its sturdy aluminium unibody, as well as for the front-facing BoomSound speakers which perform better than any other smartphone speaker on the market. The HTC One M7 overheating problem has been a controversial issue, and users experience an odd decoloration of the display whenever the phone overheats.

The HTC ONe M7 overheating problem can be alleviated through removing your case which blocks the heat from escaping the aluminium body of the phone, remove any apps (such as Skype, Magic Jack) that seem to be using too much power. For the overheating issue on the One M7 to be tempered, you could also turn off automatic synchronization,  Bluetooth, wireless apps or perform a factory reset which could fix the problem. If the overheating problem on the HTC One M7 persists, and if you see a yellow spot on your display, you should take advantage of your warranty and get another phone, because most likely your One M7 is defective. Otherwise, the One M7 doesn’t seem to have other issues.

It might be disconcerting that you would face issues like that on a brand new phone, but remember that factory defects are common among devices. The One M8 and One M7 are nonetheless the company’s flagships and both of them perform quite well. There are some similarities and some differences between the two, so if you want to make an educated choice when shopping for a new device or are thinking about upgrading from the One M7 to the One M8, read on.

The HTC One M7 and One M8 do share some design elemnts, such as the aluminium body. While the construction of the two flagships is the same, the metal body on the One M8 is more polished and rounded and has a more metallic feel than the One M7. Nevertheless, both these flagships are sturdy and durable and will not get damaged too easy. The One M8 also has rounded edges and is more comfortable in the hand, while the One M7 is more straight and boxy. The BoomSound speakers on both flagships take up a considerable amount of space on the phones, so both the One M7 and One M8 have pretty thick bezels, compared to other smartphones on the market. At the same time, the One M8 footprint is also considerably larger, but that is due to the fact that it has a larger display.

The HTC One M7 specs are inline with 2013 flagships and make for a great performance on the phone, but truth be told, they are a bit inferior to the HTC One M8 specs. Now, the One M7 has a 4.7 inch Suped LCD3 display with a 1080*1920 resolution and 469 ppi pixel density, which was quite a feat in February 2013, when the One M7 was launched. It was among the best displays you could find on the market, but it has been surpassed since by the LG G3, Galaxy Note 4 and Galaxy S5. Its older brother, the One M8 sports a 5 inch Super LCD3 display with the same 1080*1920 resolution and slightly lower 441 ppi pixel density. There’s not much difference between the One M7 display and One M8 display, but I think the 5 inch screen would be a more popular screen size considering that phablets are beginning to turn into a major trend. Nonetheless, both displays provide great viewing angles and outdoor visibility, as well as great image quality and color reproduction.

Both the HTC One M7 and One M8 have NFC and IR blasters, so you will be getting a complete connectivity package with either phones. While current flagships tend to abandon IR technology, if you like using your phone as a remote, the One M7 or One M8 should do great for your needs. The One M7 doesn’t have a microSD card slot and HTC made a great choice when it decided to include microSD support in the 2014 version of the One. With the One M7, you get 32 or 64 GB internal storage, while the One M8 offers 16 or 32 GB. If you tend to store a lot of photos, videos and music on your phone, the One M8 would be a better option and a good upgrade compared to the One M7. With the One M7, you might want to get some good cloud storage subscription with OneDrive, Google Drive, Dropbox or any other service, because 32 or 64 GB might not be enough for all the HD videos you will be taking with the device.

Camera-wise, the One M7 and One M8 are pretty similar, both having 4 UltraPixel sensors on the rear, with the difference that HTC has added an extra depth sensor on the One M8 which you can use for a whole suit of new interesting effects and functions. While the Ultrapixel cameras on both the One M7 and One M8 have been criticized, that doesn’t mean that they take sub-average photos. Actually, both devices take great photos and videos, and both have LED flash for low-light situations. Nonetheless, neither camera is great in low-light environments. The photos you shoot tend to be noisy and blurry. The One M7 does have optical image stabilization built-in, which helps keep your videos stable and less shaky, and your photos pretty sharp. As for the front cam, the One M7 has a 2.1 MP shooter, while the One M8 has a 5 MP front camera, which will certainly make for more detailed selfies.

One M7 battery life and One M8 battery life are roughly the same, asking for a charge after about 36 hours. The One M7 has a 2300 mAH battery, while the One M8 has a larger 2600 mAH battery. The One M8 does have a larger screen, which requires more juice though. Nonetheless, the battery life on the One M7 and One M8 are acceptable and fair, considering that they are smaller smartphones with less features than the Galaxy Note 4 or Galaxy S5. They should last for a few couple of days with minimal use, which is quite nice. The One M7 and One M8 will be getting Android 5.0 Lollipop in the following months, but until then the One M7 comes with Android 4.1.2 Jelly Bean out of the box, upgradable to Android 4.4.3 KitKat, while the One M8 comes with Android 4.4.2 KitKat out of the box. Sense UI 5 is overlaid on Android on the One M7, while Sense UI 6 is on the One M8. Sense has been vastly improved over the past couple years, and both the One M7 and One M8 user interface is pretty functional, practical and easy to use.

As you can see, HTC has done quite a lot with its flagships in the past two years, and choosing between the One M7 and One M8 is not actually easy. You need to take into consideration the One M7 price and One M8 price first, which points towards the cheaper One M7 as the better choice. Bang for buck ratio on the One M7 is actually awesome, the flagship giving you the specs and features of phones over the $500 mark. Since it is last year’s flagship, you’ll be able to get great deals on the phone and it would definitely be worth the average $400-$450. While the One M8 price is on the hefty side, it still brings noticeable upgrades to the One M7, such as the depth-sensor, bigger screen, better performance and bigger battery. If you are thinking about upgrading from the One M7 to the One M8, it should definitely be worth the money, especially if you find some kind of phone-swap promotion at a retailer. In any case, aside from the overheating issue on the One M7, both the One M8 and its predecessor, the One M7 are excellent flagships that have great bang for buck ratio. No matter which you end up choosing or keeping, you will probably be happy with it.

My life-long dream has been to test out every gadget on the market! Considering the fact that I've rapidly destroyed almost every gadget I've had so far, I'm not inclined to owning something, so my ideal outcome would be to have a different gadget each month. I'm really into smartphones, wearables and tablets and I love Playstation and Xbox, I'm sure I'll beat you at your own game (after a month of training... or two)
Previous Star Citizen will feature a complex FPS module with realistic mechanics
Next iPhone 5S vs Galaxy Alpha – specs, build quality and design compared