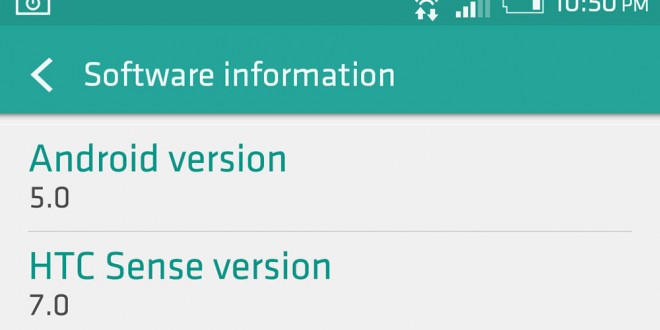 HTC and Google have spoken about HTC smartphones getting Android 5.0 Lollipop in the following weeks, and it seems that HTC is diligently working on Sense 7, too. The HTC One M8, Desire Eye and other HTC smartphones should be getting the Android 5.0 Lollipop update by the end of the year. There is a chance that HTC phones won’t get the update until early in 2015, though, so don’t get your hopes too high. Nonetheless, screenshots of the new HTC Sense 7 have leaked online and show great integration of Material Design in the UI.

HTC Sense 5 and Sense 6 were well-regarded among HTC fans, thanks to the great features and improvements the company has introduced into its UI. HTC Sense 7 will be running on top of Android 5.0 Lollipop when it hits flagships like the One M7 and One M8. In the screenshots, we can clearly see that HTC won’t be setting the appreciated Material Design elements of Android 5.0. Many of you who were delighted to see the snippets of Google’s new mobile operating systems should be glad that one of the most popular smartphone manufacturers won’t be abusing the new interface Android 5.0 Lollipop offers.

While the Android 5.0 Lollipop update is said to go live for many HTC, Samsung and Sony Xperia smartphones, manufacturers and carriers do have to review the new software and tweak it according to their own UIs. Such is the case with HTC Sense 7 and Samsung’s new TouchWiz. These companies are working on implementing their own UI on top of Android 5.0 Lollipop in order to give users a specific experience they have been used to with their phones. The HTC Sense 7 screenshots that have surface online depict a test unit of the HTC One M8 running the new Sense 7 UI on top of Android 5.0. The new Material Design elements of the UI include colorful, clean menus and icons, animated transitions, an overall flat UI that is considered very user-friendly.

Many OEMs are working on making Android 5.0 Lollipop their own with their respective UIs, but Google has also included a wide variety of Material Design elements into its own apps. The Google Play Store, Google Play Music, Newsstand, Calendar and other Google-signed apps now look re-vamped and colorful thanks to Material Design. Material Design is one of the most acclaimed features of the new Android 5.0 OS, but the platform also brings many improvements, aside from looks. New features like a re-designed and comprehensive notification system is among the most anticipated new features of Android 5.0 Lollipop. HTC is doing a great job with Sense 7, and we hope that the end-result will be as pleasing as it will be useful and user-friendly.

My life-long dream has been to test out every gadget on the market! Considering the fact that I've rapidly destroyed almost every gadget I've had so far, I'm not inclined to owning something, so my ideal outcome would be to have a different gadget each month. I'm really into smartphones, wearables and tablets and I love Playstation and Xbox, I'm sure I'll beat you at your own game (after a month of training... or two)
Previous Assassin’s Creed Unity, Call of Duty Advanced Warfare Xbox One bundles discounted for the holidays
Next iPad Air 2 battery life will be disappointing