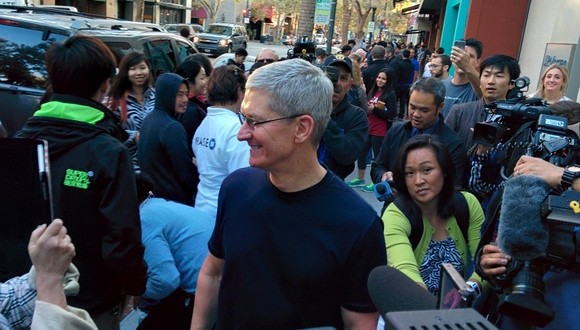 Tim Cook had briefly visited China and the Foxconn factory where the iPhone 6 and iPhone 6 Plus units were made. While he didn’t stay very long in the country, he did find the time to speak about what Apple is planning for the country in terms of Apple Pay. At the same time, Tim Cook also gave a little speech about the Apple Watch and he seemed more than enthusiastic about Apple’s new gadget. Tim Cook said that China is one of the most important markets and countries for Apple and he plans to bring everything Apple offers to U.S. and European customers into China, as well.

Tim Cook spoke about Apple Pay and what kind of problems the platform would encounter in China. One of the first things he mentioned in regard to Apple Pay was that he planned to bring it over to China as soon as possible. He didn’t give an exact date when Apple Pay would hit Chinese customers, but he did stress the fact that he would be focused on scheduling meetings with Chinese banks, retailers and carriers in order to discuss Apple Pay terms. Tim Cook and his company would have to reach an agreement with Chinese banks that would support Apple Pay, as well as get retailers and carriers aboard the project. China is actually one of the biggest markets for technology and the iPhone 6 wasn’t as popular when it hit stores as it was in the U.S., but is still had a successful launch Tim Cook can be proud of. Tim Cook also took the time to speak about the Apple Watch a bit. He said that the Apple Watch would be launched early next year, and called the new wearable a “game changer”.

Tim Cook seemed to be fascinated by the Apple Watch and emphasized the fact that when it will be launched, people will start wondering how they could live without the new wearable from Apple. While this sounds a bit arrogant, we’re fairly sure that Tim Cook and co. are making big plans for the Apple Watch.”We are going to wonder how we ever lived without it. That’s the real test of a great product: you wonder how you live without it. And I think that’s going to happen to the Apple Watch.” – Tim Cook. During his stay in China, Tim Cook met with the Chinese premier and probably discussed the allegations of Chinese spying on iCloud. Some believe that the Chinese government had performed man in the middle attacks on iCloud users and it may have been the leaker of those celebrity photos from iCloud earlier this Fall. We are curious what Ma Kai, the Chinese premier said to Tim Cook about iCloud and the involvement of the Chinese government in the hacking incident. In any case, Tim Cook described their meeting as fascinating and impressive, so we are looking forward to hearing about how Apple will be partnering up with Chinese banks, retailers and carriers in the future.

My life-long dream has been to test out every gadget on the market! Considering the fact that I've rapidly destroyed almost every gadget I've had so far, I'm not inclined to owning something, so my ideal outcome would be to have a different gadget each month. I'm really into smartphones, wearables and tablets and I love Playstation and Xbox, I'm sure I'll beat you at your own game (after a month of training... or two)
Previous Call of Duty Advanced Warfare leak manages to upset Sledgehammer co-founder
Next Selfies are a health hazard in Russia