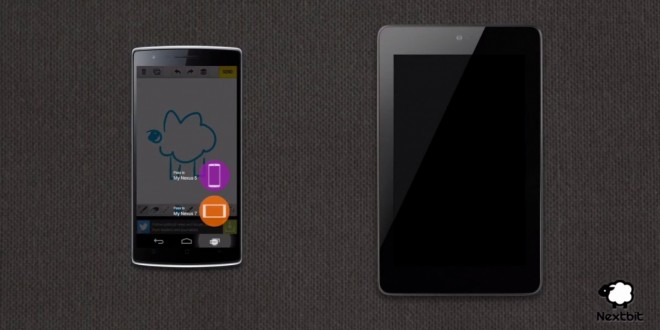 Handoff for Android through Nextbit

Handoff for Android through Nextbit

Handoff is a neat feature Apple introduced with the launch of iOS 8 and OS X Yosemite. Handoff proposes that users of iOS 8 and OS X Yosemite devices can toggle tasks and apps among each other. When you use Handoff, it means that you can start writing something on your iPhone or iPad, and pick it up where you left off on a Mac running OS X Yosemite. While Handoff is similar to the alternative Pushbullet app, it does offer smooth syncing and integration, while Pushbullet can just Handoff links, messages, notes, etc.

While Handoff is a pretty good function which has brought praise to Apple software developers, Android users don’t have such a feature in their devices just yet. With people using at least 3 devices in their home, including a phone, a tablet and a laptop or PC, Handoff would be a great feature to have on Android or Microsoft platforms as well. Handoff has the benefit of the Apple ecosystem, which makes it a hell of a lot easier to share tasks from one device to another. With Android and Microsoft, users have a variety of platforms they work with. For instance, I use an Android phone, an Android tablet and a Microsoft Windows laptop, which would make integration and handoff a bit tricky. If I were to use a Lumia phone, a Surface tablet or Windows tablet and a Microsoft Windows computer, things could be made easier. Nextbit, a company consisting of former Google, Apple, Amazon, HTC and Dropbox employees have come up with a new method of creating Handoff for Android devices.

Nextbit has developed Baton, a substitute for Handoff on Android devices. Baton doesn’t work the same way Handoff does, but it still is a step forward in device integration and syncing. Baton backs up and syncs apps and app data across devices running Android. That means that you can pick up a Google Keep Note, an Android Game, a productivity app and more that you started on an Android phone, from an Android tablet.The basic idea behind Baton is that Android users should have the same level of integration between their devices as iOS users with Handoff. While the service only works with tablets and phones at the moment, we can see a future for the platform developing soon. While Handoff is still the more convenient and integrated platform, Baton is a big step forward. We wonder if something similar to Baton and Handoff will be developed for Windows devices as well.

My life-long dream has been to test out every gadget on the market! Considering the fact that I've rapidly destroyed almost every gadget I've had so far, I'm not inclined to owning something, so my ideal outcome would be to have a different gadget each month. I'm really into smartphones, wearables and tablets and I love Playstation and Xbox, I'm sure I'll beat you at your own game (after a month of training... or two)
Previous Rockstar gives away a customized San Andreas iPad Mini 3
Next OneDrive to offer free unlimited cloud storage to Office 365 subscribers