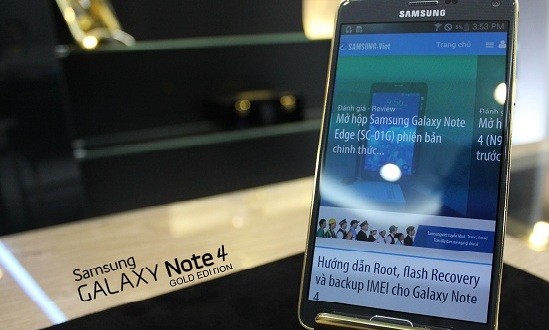 We already know about the Samsung Galaxy Note 4 and its absolutely stunning display. We also know about its impressive list of specs that can put most other flagship smartphones out there to shame. Last but not least, we know that this is a pretty expensive device, and with good reason considering how much it offers. Well, if the standard $700-$800 price tag (depending on the model) seems quite a bit, what would you say about a Samsung Galaxy Note 4 that costs no less than $2000? As you might imagine, this is not any old phone as the device I’m talking about comes equipped with a 24K gold frame.

That’s right, now there’s a Samsung Galaxy Note 4 Gold Edition out there and it’s even available for purchase. However, the phablet only seems to be available in Vietnam at the moment and we don’t know if you will eventually arrive to other regions as well. In any case, Samsung Vietnam certainly seems very proud of the phone and has uploaded a plethora of pictures of it on their website. Worth mentioning is the fact that only the black version of the Samsung Galaxy Note 4 seems to feature a Gold Edition and the back cover is still as before, with only the frame and the parts around the camera being made out of gold. Also, the S Pen is not covered in gold either, but it will be in the future if I understand correctly from Google’s translation of Samsung Vietnam’s website.

I’m Load The Game’s co-founder and community manager, and whenever I’m not answering questions on social media platforms, I spend my time digging up the latest news and rumors and writing them up. That’s not to say I’m all work and no fun, not at all. If my spare time allows it, I like to engage in some good old fashioned online carnage. If it’s an MMO with swords and lots of PvP, I’m most likely in it. Oh, and if you’re looking to pick a fight in Tekken or Mortal Kombat, I’ll be more than happy to assist! Connect with me by email markjudge (@) loadthegame.com only
@@MarkJudgeLTG
Previous Facebook CEO Mark Zuckerberg admits that Oculus Rift must sell lots of units to achieve market impact
Next Wildstar now allows for free transfers between PvP and PvE realms