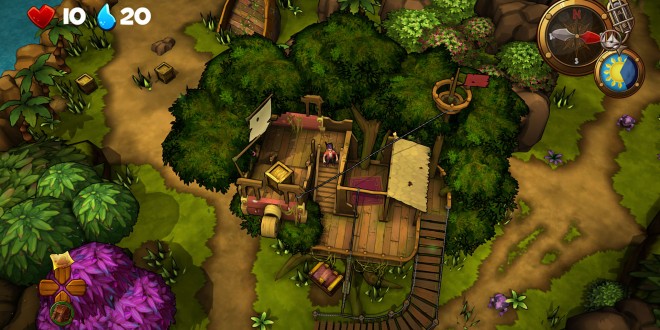 After months of working in total secret, Hong Kong-based developer Eastasiasoft has recently unveiled its latest creation – Lost Sea. Lost Sea is 3D strategy action title taking place in a procedurally-generated archipelago, where you and a ragtag crew of survivors must explore the surrounding islands, hunt for resources to upgrade your ship, and make your escape. The game’s first trailer in addition to a few screenshots can be found below.

“Lost Sea is set inside a cartoon B-movie universe (as can easily be seen from its teaser trailer above), where an otherwise normal individual is transformed into an intrepid hero after a routine flight over the Atlantic Ocean ends in disaster, leaving you stranded on a mysterious archipelago located deep inside the Bermuda Triangle,” reads Lost Sea’s official description. “The world of Lost Sea is a dangerous and unforgiving place. Every island is filled with strange landmarks, a wide variety of deadly and exotic creatures, and powerful relics that can be used to your advantage (Lara Croft and the Guardian of Light, anyone?). Often you’ll need to use your wits – as well as your machete – to escape dire situations, and any member of your crew unlucky enough to get taken out or left behind won’t be coming back (permanent-death confirmed).”

Surviving the harsh but colorful environments of Lost Sea means balancing the immediate needs of your crew – i.e. gathering food to restore health and stamina – with more long-term goals like researching powerful upgrades and unlocking access to new areas. For example, players can either provide their teammates with armour so they can survive longer, or with torches so they can gather materials and protect themselves at night. “We wanted to make a game that revolves around making tough decisions, and with materials being so scarce it often leads to quite painful trade offs,” continues the developer.

As mentioned above, the entire game is procedurally-generated, meaning Eastasiasoft procedurally-generates every island, from the look and layout of the island itself to the critters and objects that can be found inside and its location in the overall archipelago. Although Lost Sea doesn’t have a fixed release date, the developer promises a 2015 launch on the PlayStation 4, Xbox One, and PC. Oh, and don’t forget to vote for it on Steam Greenlight.

I’m Load The Game’s co-founder and community manager, and whenever I’m not answering questions on social media platforms, I spend my time digging up the latest news and rumors and writing them up. That’s not to say I’m all work and no fun, not at all. If my spare time allows it, I like to engage in some good old fashioned online carnage. If it’s an MMO with swords and lots of PvP, I’m most likely in it. Oh, and if you’re looking to pick a fight in Tekken or Mortal Kombat, I’ll be more than happy to assist! Connect with me by email markjudge (@) loadthegame.com only
@@MarkJudgeLTG
Previous Explosive top-down racing game BlazeRush now available
Next OnePlus One will be available for pre-order again next month