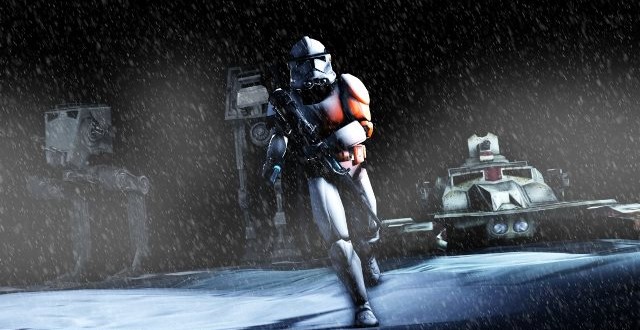 The highly anticipated Star Wars Battlefront has been delayed from its original Summer 2015 launch window and was given a new release date by publisher EA earlier today during a conference call with investors. Electronic Arts announced on Twitter that we should only expect to see the game sometime during Holiday season 2015. While a specific release date was not mentioned, it’s pretty safe to assume that the game will release relatively close to Christmas. Indeed, EA hinted at something along those lines earlier this year when it said that Star Wars Battlefront will launch around the same time as the Star Wars Episode 7 movie, which is scheduled to arrive in theaters on December 18, 2015.

Aside from announcing the tentative release date for Star Wars Battlefront, Electronic Arts made yet another major announcement earlier today. The publisher said that the sequel to Battlefield 4 – presumably called Battlefield 5 – will not be released next year so that players can “have enough time between releases to fully explore the depth and innovation in our shooter titles.” The company also added that Battlefield 5 is expected to launch sometime in Q3 2016, which is the period between October and December 2016. This decision might have something to do with the recent news that pre-orders for Call of Duty Advanced Warfare are not going pretty well and neither will the post-launch sales according to analysts. Gamers are beginning to get tired of the mandatory annual sequel, so EA is definitely doing the right thing here.

Meanwhile, the publisher also went on to delay Battlefield Hardline yet again and said that the game will now only release in March 2015. “The cops and criminals fantasy – this is kind of the foundation for the game – resonated very, very strongly not just with existing fans, but with new players to the Battlefield franchise,” Battlefield Hardline developer Visceral Games explains. “But the feedback was also universal that we should go deeper with that fantasy and really deliver against that to a greater degree. What we’ve done is given the development team that time to go back in and really look at how to truly deliver on that cops and criminals kind of gameplay as it exists in a Battlefield world.”

While DICE is not working on the upcoming Battlefield Hardline, the developer has more than enough on its plate with Star Wars Battlefront and Battlefield 5. To top it all off, the company is also working on a new Mirror’s Edge game.

I’m Load The Game’s co-founder and community manager, and whenever I’m not answering questions on social media platforms, I spend my time digging up the latest news and rumors and writing them up. That’s not to say I’m all work and no fun, not at all. If my spare time allows it, I like to engage in some good old fashioned online carnage. If it’s an MMO with swords and lots of PvP, I’m most likely in it. Oh, and if you’re looking to pick a fight in Tekken or Mortal Kombat, I’ll be more than happy to assist! Connect with me by email markjudge (@) loadthegame.com only
@@MarkJudgeLTG
Previous Titanfall and Battlefield 4 available at 50% off as part of Origin’s Halloween sale
Next Dying Light no longer coming to the PS3, 360