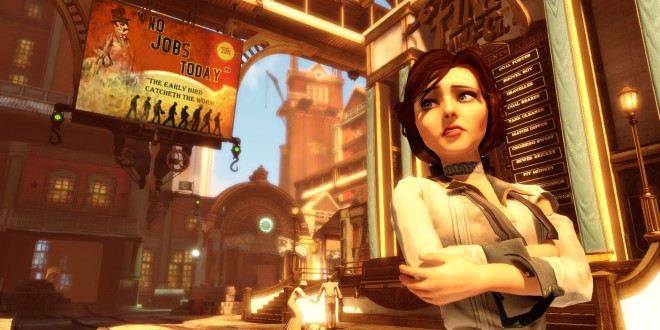 Publisher Take-Two has just announced the Complete Edition of last year’s BioShock Infinite will be available for purchasing starting November 4th, on the PlayStation 3 and Xbox 360. Said compilation includes the base game and all its previously-released downloadable packages, meaning the Clash in the Clouds add-on and Episode One and Episode Two of the game’s expansion – Burial at Sea. Additionally, this latest collection also includes all of BioShock Infinite’s packs of weapons, gear, and other items, meaning the Industrial Revolution Pack, Upgrade Pack, and the Early Bird Special Pack. BioShock Infinite The Complete Edition will set you back $39.99.

BioShock Infinite is a first-person shooter title developed by Irrational Games and published by 2K Games. It was released worldwide for the PlayStation 3, Xbox 360, and PC on March 26th, 2013; an OS X port by Aspyr was later released on August 29th, 2013. Infinite is the third installment in the BioShock series, and though it is not immediately part of the storyline of previous BioShock games, it does feature similar gameplay concepts and themes. Irrational Games and Creative Director Ken Levine based the game’s setting on historical events at the turn of the 20th century, such as the 1893 World’s Columbian Exposition and based the story on the concept of American exceptionalism, while also incorporating influences from more recent events at the time such as the 2011 Occupy movement.

Set in 1912, the game has protagonist, former Pinkerton agent Booker DeWitt, sent to the floating air city of Columbia to find a young woman, Elizabeth, who has been held captive there for most of her life. Though Booker rescues Elizabeth, the two become involved with the city’s warring factions – the nativist and elite Founders that rule Columbia and strive to keep its privileges for White Americans – and the Vox Populi – underground rebels representing the underclass of the city. During this conflict, Booker learns that Elizabeth possesses strange powers to manipulate “Tears” in the space-time continuum that ravage Columbia, and soon discovers her to be central to the city’s dark secrets.

I’m Load The Game’s co-founder and community manager, and whenever I’m not answering questions on social media platforms, I spend my time digging up the latest news and rumors and writing them up. That’s not to say I’m all work and no fun, not at all. If my spare time allows it, I like to engage in some good old fashioned online carnage. If it’s an MMO with swords and lots of PvP, I’m most likely in it. Oh, and if you’re looking to pick a fight in Tekken or Mortal Kombat, I’ll be more than happy to assist! Connect with me by email markjudge (@) loadthegame.com only
@@MarkJudgeLTG
Previous The Evil Within’s latest patch adds 60 FPS toggle
Next Lenovo’s $2.9 billion acquisition of Motorola has been finalized