Breaking News
Home » GAME TRAILERS » This War of Mine gets a release date, new trailer 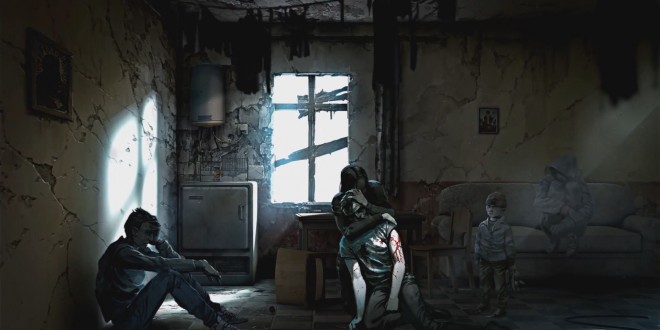 This War of Mine gets a release date, new trailer

Developer 11 bit studios has recently announced the release date for its upcoming 2D adventure title This War of Mine, in addition to revealing a brand-new trailer entitled ‘The Things That Take us Back’. This War of Mine – an atypical war-themed title in which players take on the roles of several innocent civilians caught in the horrors of warfare – is scheduled for a November 14th release, exclusively on the PC, Mac, and Linux.

As can be seen in the trailer above, This War of Mine is played from a 2D perspective in which a group of civilians are trying to survive a city besieged by war. Players will have to scavenge and manage food supplies, medicine, all while avoiding soldiers and scavengers. A few weeks ago, 11 bit studios announced a partnership with War Child – a charity organization that’s trying to help people in in a similar situation in the real world. 11 Bit Studios CEO Grzegorz Miechowski said the partnership will help This War of Mine reach more people and raise money for War Child. You can check out more details on War Child on its official website.

“This War of Mine is a dark survival game where the player controls a team of civilians in a besieged city,” reads the game’s official description. “The main goal of the game is to survive the war with the tools and materials the player can gather with the characters they control. The player will have to take care of each character’s needs to keep them performing at their best so they may build tools, salvage resources, cook food, and stay alive. During the day, the player controls the civilians within the house to build their shelter to withstand the war. At night, the player is given the opportunity to venture out and resupply equipment and resources for their everyday survival.”

I’m Load The Game’s co-founder and community manager, and whenever I’m not answering questions on social media platforms, I spend my time digging up the latest news and rumors and writing them up. That’s not to say I’m all work and no fun, not at all. If my spare time allows it, I like to engage in some good old fashioned online carnage. If it’s an MMO with swords and lots of PvP, I’m most likely in it. Oh, and if you’re looking to pick a fight in Tekken or Mortal Kombat, I’ll be more than happy to assist! Connect with me by email markjudge (@) loadthegame.com only
@@MarkJudgeLTG
Previous Borderlands The Pre-Sequel’s first DLC adds new character
Next Far Cry 4 has gone gold

iPhone 5S vs iPhone 6: is it worth the upgrade?

The iPhone 5S and iPhone 6 are two of the most popular smartphones at the ...