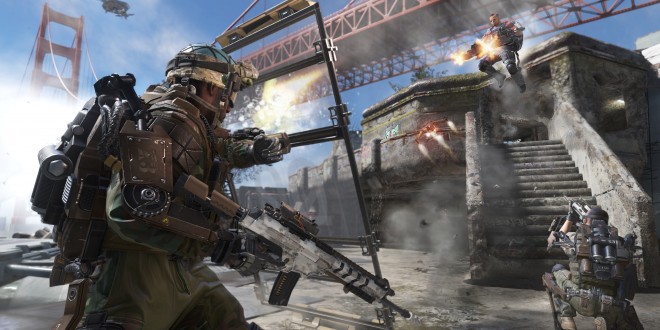 Call of Duty Advanced Warfare is already in the hands of gamers, all thanks to its special ‘Day Zero’ edition which lets them experience it one day earlier. As a result, Sledgehammer Games Co-Founders Glen Schofield and Michael Condrey have recently held an ‘Ask Me Anything’ session on Reddit, talking about the Xbox One’s dynamic resolution and how challenging it was to bring Call of Duty Advanced Warfare on the current generation of consoles.

“Just getting the game onto next gen platforms was tough,” explained the developers. “All new engine and tech, learning our way around that was time consuming but that’s where the three years came in handy.” Sledgehammer has also confirmed the PlayStation 4 version is running in native 1080p, while the Xbox One’s resolution is 1360×1080, although it dynamically scales from there to full 1080p. According to Condrey, that’s over 50% increase from last year’s COD: Ghosts. Additionally, a third-person toggle hasn’t been ruled-out from future installments, although the COD franchise is all about that twitch-based gameplay, so going third-person might prove difficult; but, Schofield is open to all ideas. Call of Duty Advanced Warfare’s futuristic setting was chosen because the folks at Sledgehammer are fans of future science and tech. They didn’t really want to go full sci-fi, but also didn’t want to return to the past, as the World War II theme has been done to death.

According to Condrey, Call of Duty Advanced Warfare brings for the franchise the biggest change in player-movement and mechanics through the Exo in nearly a decade. There are also robust changes to multiplayer. Kevin Spacey and the rich narrative in campaign are also perks. It s the most ambitious game Sledgehammer has ever made, and thanks to the extra time from Activision for a 3 year dev cycle, they couldn’t be more proud to share it with fans.

I’m Load The Game’s co-founder and community manager, and whenever I’m not answering questions on social media platforms, I spend my time digging up the latest news and rumors and writing them up. That’s not to say I’m all work and no fun, not at all. If my spare time allows it, I like to engage in some good old fashioned online carnage. If it’s an MMO with swords and lots of PvP, I’m most likely in it. Oh, and if you’re looking to pick a fight in Tekken or Mortal Kombat, I’ll be more than happy to assist! Connect with me by email markjudge (@) loadthegame.com only
@@MarkJudgeLTG
Previous Assassin’s Creed Rogue is a PS3 exclusive in Japan
Next Evolve’s “big alpha” finally available on the PS4