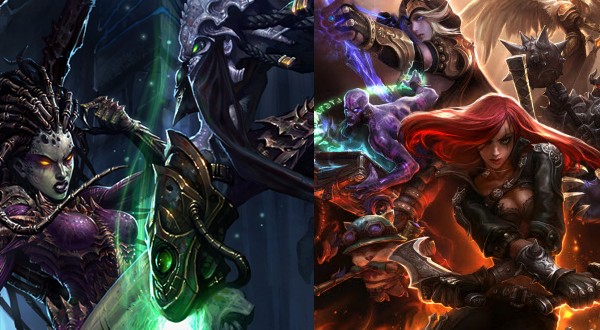 There’s plenty of rivalry in the world of gaming as I learned some years back when every new MMORPG was challenging World of Warcraft for its crown. This rivalry was less between the companies who made the games and more between the people who were playing them. The situation hasn’t changed much nowadays, although the battleground has certainly shifted a bit. The biggest “war” I’m seeing right now is waged between the fans of Dota 2 and those of League of Legends, the two most popular MOBA games around. However, as seen by some recent actions, there are people out there who realize that these games are eSports and eSports should be supported whenever possible if the gaming industry is to continue its promising growth.

Another eSport that needs all the support it can get is Blizzard Entertainment’s sci-fi real-time strategy, Starcraft 2. While there are numerous MOBAs, shooters, MMOs and fighting games on the eSports scene, Starcraft 2 is the only RTS that’s currently being played at a professional level. This past weekend while the Global Finals of the SC2 World Championship Series were taking place, a group of gamers with a preference for a very different title were trying to spread awareness on Reddit and help the tournament with its rather low view count on Twitch. The group in question is part of the League of Legends community, a game that generally has a bad reputation among the other eSports communities.

While many people like to bash League of Legends and its community for playing a game that’s “just a simplified version of Dota 2”, I can’t help but feel that a lot of its players are more mature than many gamers out there, at least in this particular scenario. On the other hand, the Starcraft 2 community seems less supporting of the LoL one, even though there’s no real reason to be a rivalry between them seeing as how their favorite games are part of very different genres. As someone over on Reddit put it: “Big shoutout to everyone at /r/leagueoflegends! Thank you for supporting us even though the /r/starcraft community tends to sh*t on League of Legends a lot.”

It would really be nice to see communities supporting each other at lest during major eSports competitions as this greatly helps the gaming industry at the end of the day. What do you think about all of this? I’m looking forward to reading your opinions in the comments section below.

I’m Load The Game’s co-founder and community manager, and whenever I’m not answering questions on social media platforms, I spend my time digging up the latest news and rumors and writing them up. That’s not to say I’m all work and no fun, not at all. If my spare time allows it, I like to engage in some good old fashioned online carnage. If it’s an MMO with swords and lots of PvP, I’m most likely in it. Oh, and if you’re looking to pick a fight in Tekken or Mortal Kombat, I’ll be more than happy to assist! Connect with me by email markjudge (@) loadthegame.com only
@@MarkJudgeLTG
Previous Moto 360 vs Asus ZenWatch – round or classy
Next Galax launches its custom Hall of Fame GTX 970 and GTX 980 cards