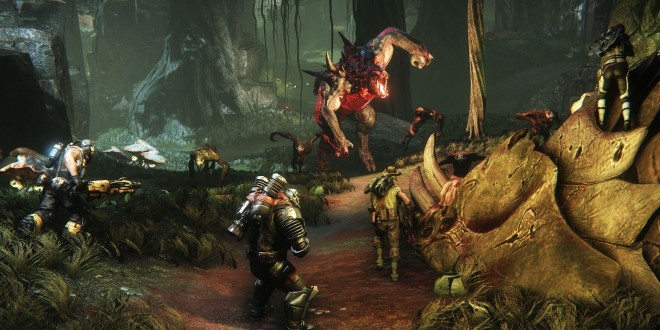 Instead of starting at the same time as the PC version, Evolve’s “big alpha” on the PlayStation 4 had been delayed due to the console’s recent 2.0 firmware update. Thankfully, publisher 2K Games has recently announced the alpha is now live for the PS4, via an official statement. “After exploring all available solutions, we believe we have addressed the majority of known issues affecting the Evolve Big Alpha on PlayStation 4 following the PS4 2.0 firmware update,” explained the publisher. “The alpha test is now live on PS4 after a gradual roll out to registered participants. Evolve’s closed alpha test is also being extended on Xbox One, PC and PS4 through Tuesday, November 4 at 12:00 PM PST (8:00 PM UTC).”

“Alpha tests analyze and troubleshoot unfinished products. While internal testing shows the majority of PS4 matches are completed successfully, some players will encounter interruptions and issues affecting the Evolve experience. We ask for your patience and participation as we rigorously test Evolve to ensure a successful launch on February 10, 2015. We thank everyone helping us test Evolve. Your participation in the Evolve Big Alpha plays a critical role in allowing us to develop the best possible gaming experience.” Additionally, a PS4 update is on the way, presumably to further patch some issues related to Turtle Rock Studios’ latest title.

Evolve is an asymmetrical multiplayer game pitting four player-controlled hunters against an alien monster controlled by a fifth player. Both hunters and monsters can use unique abilities during the game. The monster-player can kill other smaller creatures to evolve and become stronger by entering a cocoon stage, leaving itself vulnerable for a short duration. The game will feature a variety of maps, one of which being a large jungle with some industrial elements where players can take shelter. There are various power-ups that both hunters and monsters can obtain by killing the local wildlife.

I’m Load The Game’s co-founder and community manager, and whenever I’m not answering questions on social media platforms, I spend my time digging up the latest news and rumors and writing them up. That’s not to say I’m all work and no fun, not at all. If my spare time allows it, I like to engage in some good old fashioned online carnage. If it’s an MMO with swords and lots of PvP, I’m most likely in it. Oh, and if you’re looking to pick a fight in Tekken or Mortal Kombat, I’ll be more than happy to assist! Connect with me by email markjudge (@) loadthegame.com only
@@MarkJudgeLTG
Previous Call of Duty Advanced Warfare’s XB1 resolution is dynamic
Next Mario Kart 8’s first dlc coming in late November