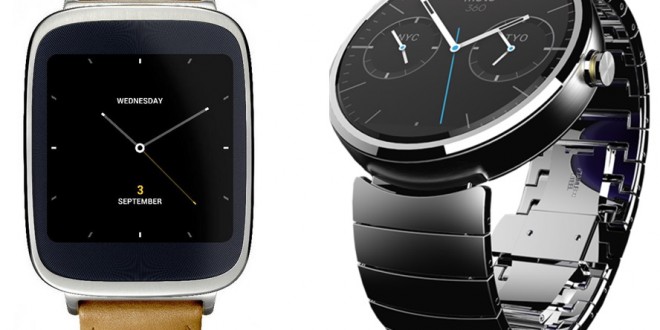 Moto 360 vs Asus ZenWatch - round or classy

Moto 360 vs Asus ZenWatch – round or classy

The Moto 360 and Asus ZenWatch have been the talk of the town lately. While the Asus ZenWatch hasn’t been officially launched yet, the company is prepping fervently with three new apps we will be discussing later. A Moto 360 update has also been recently issued and it supposedly improves battery life. An Android Wear update should improve the appearance of the OS on the round smartwatch, which is a nice treat to receive this Fall. The wearable market is constantly expanding, but since the Moto 360 is the most popular round smartwatch at the moment, and the Asus ZenWatch is among the most anticipated ones, we should see how they size up to each other.

The Moto 360 has been revered as the most stylish and fashionable smartwatch you can find, at a reasonable price. The Moto 360 price is $250 and you get the neat wireless charger in the package as well, which is a great deal, in my opinion. While many have complained that the Moto 360 might be expensive, other watches like the Apple Watch or the Samsung Gear S are well over the $300 mark. The Apple Watch price can rise up to even $1000 if you choose one of the more exquisite models Apple will be selling sometime next year. The Asus ZenWatch, on the other hand, has been praised for its price, as well as for its form factor and classy design. The Asus ZenWatch price will be around $180 when it launches later this month, making it one of the cheapest Android Wear smartwatches you can find on the market.

The Asus ZenWatch and Moto 360 specs are fairly similar, what sets the watches apart relies more on the design of each. The Moto 360 is a round smartwatch, which is kind of bulky, to be fair. If you have smaller wrists or are a female, you will probably think it’s too big until you get used to wearing the timepiece. The Asus ZenWatch has a bit smaller form factor, and because it has a rectangle watch face, it can even out the bulk more easily than the Moto 360 design. One flaw of the Moto 360 is that it doesn’t have a fully round display like the LG G Watch R. The ambient light sensor and other hardware components had to be put somewhere, so Motorola sacrificed the bottom part of the Moto 360 display, which ended up having a black bar. Many Moto 360 users said that they weren’t bothered by the small aesthetic flaw of the Moto 360, and if you use the timepiece for a couple of days, you will get used to that blank bottom bar on the bottom.

If you want to get the Moto 360, you can choose between various watchstraps, including leather and steel ones. Amazon has spilled the beans on a new version of the Moto 360 coming later this year, too. The new models of the Moto 360 will supposedly have a golden and steel watch faces and from the leaked pictures of them, they look extremely stylish. The Asus ZenWatch keeps it simple when it comes to design, and tries to resemble traditional timepieces more than other rectangle smartwatches. The ZenWatch has a rectangular watchface with fairly small bezels on the side and a nice leather strap. Both watches have standard watch straps, so you can switch out the straps with any strap of your choice fitting the measurements. While both these watches are stylish and fashionable, according to most reviewers (I agree), they tend to appeal to different crowds. Those who would prefer a round timepiece will go for the more expensive Moto 360, while those who like the rectangular shape of the Asus ZenWatch will rejoice in its low price.

The Moto 360 features IP certification, so it’s unlikely that you will ruin the timepiece in case you forget to take it off before getting in the shower. The Moto 360 display is a 1.56 inch one with a 320*290 resolution and 205 ppi pixel density. The Moto 360 runs on a Texas Instrument OMAP 3 CPU backed by 512 MP BAM and 4 GB internal storage. The Moto 360 has a 320 mAH battery which can be wirelessly charged in a stylish dock that’s included in the package. After the Moto 360 update, the timepiece should last for about  days without abusing the Ambient Light feature, which is good news for wearable enthusiasts. The Moto 360 features Bluetooth 4.0, 9 axis sensor and a heart rate monitor on the back, as well. Voice control is naturally a significant part of Android Wear and the timepiece, as well. The Motorola smartwatch also has a wider selection of custom apps designed for it, but that’s not necessarily a determining factor in this comparison, because developers are constantly working on various apps for every wearable you can find out there.

The Asus ZenWatch  will sport an AMOLED display protected by Corning Gorilla Glass 3 encased in a rose gold aluminium body. Asus’ own ZenUI is said to be featured on top of Android Wear and will automatically unlock your phone. Tap Tap and Find My Phone are going to be pre-loaded on the device, as well as a remote camera trigger. Much like the Moto 360, you can cover the display and the call it’s displaying will be muted. The Presentation Control feature will also enable the Asus ZenWatch to be used in presentations. A wellness manager will also be included, measuring steps, calories, activity duration, heart rate, exercise intensity and relaxation level. The Asus ZenWatch is powered by a Snapdragon 400 CPU clocked at 1.2 GHz, backed by 512 MB RAM and 4 GB internal storage. The AMOLED display measures 1.63 inches and has a 320*320 resolution with 278 ppi pixel density. There will be a 9 Axis sensor and a Bio sensor built-in, along with Bluetooth 4.0, microUSB port for charging and a microphone. The battery will be a 1.4 Wh one and the watch will be IP55 certified. Even though the Wellness app is said to measure heart rate, there is no mention of a heart rate sensor.

As you can see, both these smartwatches can be put in the top-notch category and you will surely be satisfied with either one of them. The Asus ZenWatch will supposedly be released in limited numbers at first, so you might want to keep an eye out for December 15, which is the current rumored launch date for the new wearable. The Asus ZenWatch was launched in Japan on October 8, and Asus teased a custom application suite that would be arriving to the timepiece. Shipping of the ZenWatch should commence this month. The price tag for the Asus ZenWatch was announced as $70 in Japan, but we don’t have confirmation on what price the wearable will have once it hits U.S. shores. Overall, both the Moto 360 and Asus ZenWatch are stylish, fashionable smartwatches that can pair with many watchstraps of your choice, so that you can match them with any kind of outfit or occasion. Which would you choose? Oh, and I’m curious, would you sport a smartwatch at a formal event?

My life-long dream has been to test out every gadget on the market! Considering the fact that I've rapidly destroyed almost every gadget I've had so far, I'm not inclined to owning something, so my ideal outcome would be to have a different gadget each month. I'm really into smartphones, wearables and tablets and I love Playstation and Xbox, I'm sure I'll beat you at your own game (after a month of training... or two)
Previous Xbox One’s fall 2015 lineup is “crazy,” delays might happen
Next eSports family: League of Legends community helps promote the Starcraft 2 WCS on Reddit