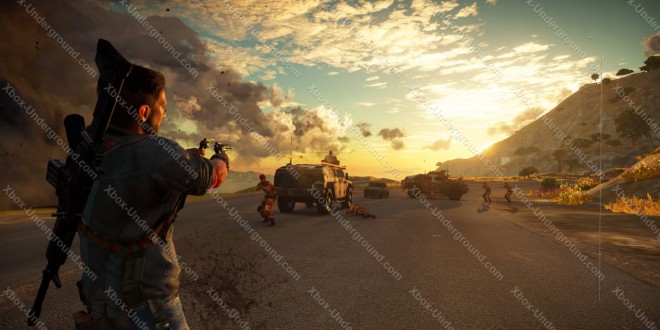 Four new screenshots showcasing what seems to be the next entry in the massive open-world action franchise Just Cause have recently hit the internet, via Xbox-Underground.com. While developer Avalanche Studios has never officially confirmed a “Just Cause 3” is in development, there have been a lot of clues pointing that way, and this recent leak only adds fuel to the proverbial fire. One of said images showcases the series’ protagonist Rico, as well as what looks like a birds-eye-view shot of an island. However, the most curious part comes from another screenshot, which apparently reveals micro-transactions as part of the in-game economy.

As mentioned above, the next entry in the Just Cause series is one of the worst-kept secrets in the industry. Back in April 2012, Avalanche Boss Christofer Sundberg stated the Just Cause franchise is “perfect” for the PlayStation 4 and Xbox One consoles. “There is a very strong emotional attachment to the franchise as it was created by me and my design team here, so we would obviously like to see a very bright future for Just Cause,” he said. “In this day and age when everyone is struggling to make money, my opinion is that the JC IP is perfect for everything that next-gen has to offer.”

Back in September, a former employee of Chinese outsourcing development studio Virtuos revealed he had been working on Just Cause 3, earlier this year. While the first Just Cause had received mixed reviews, its sequel fared way better, with praise being directed at the game’s open-ended nature, world design, soundtrack, and gameplay mechanics, as well for being an improvement over its predecessor. On the flip-side, criticism was directed at the game’s story and voice acting. Just Cause 2 was also a commercial success, selling over six million copies as of September 2013. Just Cause 2 is available on the PlayStation 3, Xbox 360, and PC, while the first one on the Xbox 360, PlayStation 2, the original Xbox, and PC.

I’m Load The Game’s co-founder and community manager, and whenever I’m not answering questions on social media platforms, I spend my time digging up the latest news and rumors and writing them up. That’s not to say I’m all work and no fun, not at all. If my spare time allows it, I like to engage in some good old fashioned online carnage. If it’s an MMO with swords and lots of PvP, I’m most likely in it. Oh, and if you’re looking to pick a fight in Tekken or Mortal Kombat, I’ll be more than happy to assist! Connect with me by email markjudge (@) loadthegame.com only
@@MarkJudgeLTG
Previous Halo is stepping back into the eSports limelight this weekend
Next HP launches The Omen: a slim gaming notebook

Playstation has revealed a video compilation of gameplay footage from their upcoming title Mad Max. By way ...