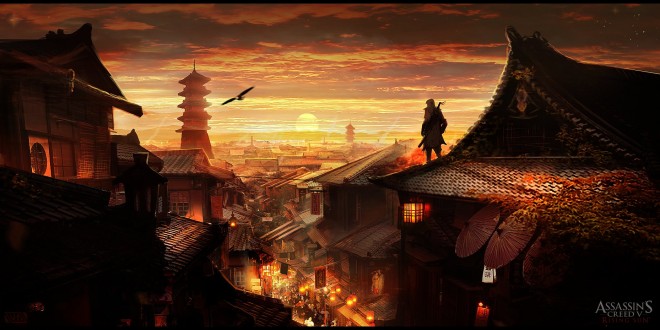 Here’s how “Assassin’s Creed V: Rising Sun” could look like

While publisher Ubisoft is still hanging-on to North America via Assassin’s Creed Rogue and simultaneously takes a stab at the French Revolution via Assassin’s Creed Unity, artist Vin Hill has recently designed a few sketches showcasing what an Assassin’s Creed set in Japan could look like. Assassin’s Creed V: Rising Sun – as Hill calls it – is set in Kyoto during the Meiji restoration in the 19th century, an era where the country ended centuries of self-imposed exile and embraced the modern world. Below you’ll find just a few art-pieces, but you can check out the rest on Van Hill’s website.

Of course, the above sketches – while gorgeous on their own – aren’t anything official, so don’t get too hyped about a possible Japan-themed Assassin’s Creed title. Still, if you’re just craving for an Asian-themed title set in the highly-popular franchise, you might get your thirst somehow satisfied by checking out the 2.5D spinoff called Assassin’s Creed Chronicles: China, in which players take on the role of Shao Jun, an assassin hell-bent on revenge whom will use the skills she had learned under legendary assassin Ezio Auditore to exact vengeance. Players will be able to rely on stealth to accomplish their missions, as well as Shao Jun’s martial arts training and all-new assassin gear.

A few weeks ago, the French publisher had revealed its plans to release several other entries in the Chronicles sub-franchise, each featuring its own history and art-style. “We really liked the side-scrolling idea, like Mark of the Ninja, and we thought it would be a really great way to explore some of the other universes we’ve created,” Assassin’s Creed Unity Creative Director Alex Amancio told in an interview. “One thing that’s really cool is that every one of the chapters of this game will be in the art style representative of that era in time. This is why Shao Jun’s game is like Chinese ink – very black and red. Once we have other characters and time-frames, the art style will completely change to match that specific character.”

I’m Load The Game’s co-founder and community manager, and whenever I’m not answering questions on social media platforms, I spend my time digging up the latest news and rumors and writing them up. That’s not to say I’m all work and no fun, not at all. If my spare time allows it, I like to engage in some good old fashioned online carnage. If it’s an MMO with swords and lots of PvP, I’m most likely in it. Oh, and if you’re looking to pick a fight in Tekken or Mortal Kombat, I’ll be more than happy to assist! Connect with me by email markjudge (@) loadthegame.com only
@@MarkJudgeLTG
Previous World of Warcraft stops losing subscribers as the launch of Warlords of Draenor approaches
Next Logitech unveils new mouse aimed at pro MOBA players