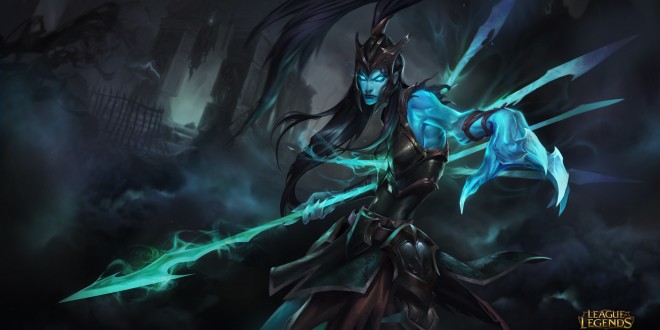 The League of Legends roster is getting just a little bit bigger with the addition of a new champion who goes by the name of Kalista, the Spear of Vengeance. This spooky lady was once a fair maiden who was treacherously murdered and is now seeking revenge as a specter. Her description also tells us that Kalista has a proposition for all the other League of Legends champions: “surrender your soul to the Spear of Vengeance and she will exact retribution on your betrayers.” These are not just fancy words as Kalista starts off with an item called The Black Spear and she can use it to make a pact with an allied champion that allows the “Soul-Bound” pair to do bonus damage when they fight together.

Moreover, the pact also unlocks her ultimate ability, which can’t be used without a partner as far as I can tell. Her ultimate is called Fate’s Call and allows her to literally transform her bound ally into a weapon and throw it at their enemies. This attack does AoE damage and knocks back enemies caught in the blast, so it’s perfect for crowd control. Kalista’s synergy with an ally is pretty unique in League of Legends, but she has some other interesting abilities as well. Pierce is a ranged ability that allows her to throw a spear that gets stuck in the enemy and adds a stack of Rend. If Kalista then actives Rend, all the lodged spears are ripped out of the enemy, dealing bonus damage for each spear and slowing the target.

Even more interesting is her passive ability Martial Pose. This allows her to hop around when using basic attacks, which makes her particularly great at kiting. Again, not something you see everyday in League of Legends. Last but not least, Kalista can summon a patrolling ward that’s useful for detecting enemies with her Sentinel ability. This ability also has a passive component that gives bonus damage to her and her Soul-Bound ally when their attacking the same target. All in all, Kalista is build for cooperation and players who like working with their team mates will enjoy playing her the most according to Riot. League of Legends is a team game at the end of the day so that definitely makes sense.

“Champion diversity helps us accomplish one of our key goals, that each game of League feels different than the ones before it,” said the developer of League of Legends. “Just as important as champ diversity is player diversity. Some opponents are risk-averse, some fight early and often. Adjusting to the unique rhythm of each game is critical to success. But League is a team game. Reading and reacting to your allies’ demeanor is equally important to victory. Kalista is for players who enjoy or want to improve at taking the pulse of teammates and working together toward a win. As designers, we are constantly trying to help players succeed. Building scenarios that overwhelm or confuse players is simple, laying the foundations for success is the challenge. As such, Kalista highlights the cooperative end-state in which she and her ally are most likely to succeed and offers a tool kit to enable players to reach that state.”

I’m Load The Game’s co-founder and community manager, and whenever I’m not answering questions on social media platforms, I spend my time digging up the latest news and rumors and writing them up. That’s not to say I’m all work and no fun, not at all. If my spare time allows it, I like to engage in some good old fashioned online carnage. If it’s an MMO with swords and lots of PvP, I’m most likely in it. Oh, and if you’re looking to pick a fight in Tekken or Mortal Kombat, I’ll be more than happy to assist! Connect with me by email markjudge (@) loadthegame.com only
@@MarkJudgeLTG
Previous iPhone 6 will be getting a $99 price cut pre-Black Friday
Next AMD Radeon R9 290X and 290 get substantial price cuts – Nvidia backed against the wall