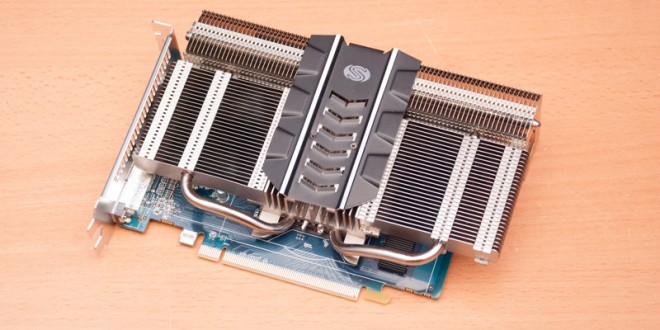 There is no doubt that high-end cards will always be the stars of PC gaming, but for now let’s turn our attention to the market’s low-end segment which brings plenty interesting choices at reasonable prices and decent overall performance. Sapphire R7 250 Ultimate is one of those cards, as its purpose is not to blow the doors off in gaming benchmarks but to provide reliability and stable performance in a completely silent fashion. Although hard to believe that this card is not going to cook itself to death while running today’s highly demanding titles, Sapphire has managed to prove that this passive cooling solution does actually work. The Sapphire R7 250 Ultimate is the first Ultimate series card to employ a passive heatpipe and heatsink cooler with no fans and no mechanical moving parts.

This revolutionary passive cooled low-end card offers increased reliability and shocking performance at a zero decibel level. Sapphire R7 250 Ultimate features 1GB GDDR5 memory and a Core Clock of 800 Mhz which, believe it or not, supports overclocking without causing any fire emergencies. The card maintains a decent idle temperature of 36 degrees Celsius, while in an overclocking setup it rarely exceeds the 50 degrees Celsius mark, which for a passively cooled card is very impressive. In terms of performance, the Sapphire R7 250 Ultimate does a very good job when rendering recent titles such as Battlefield 4 on Ultra settings, keeping a pretty stable 24FPS. When played on medium settings the game hits a staggering 60FPS which is out of this world for a game running on a low-end GPU created for general desktop use. Therefore, a console-style 720p gaming with zero noise and a frame rate average of 30 to 50FPS does not sound bad at all for players who are looking to spend under $100 on their PC graphics unit.

I'm Razvan, a sports and first-person shooter enthusiast. I've always loved writing, even more so when it involves games. When I'm not playing on my PS3 or writing, I like to run exhausting cardio workouts, play soccer, watch a good movie, or read a good book.
Previous Android 4.4.4 KitKat rolling out to Xperia Z2 globally
Next The Legend of Zelda Majora’s Mask gets a 3DS remake