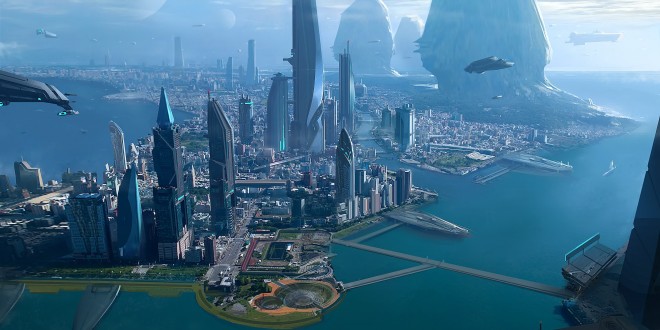 Star Citizen, the massive space sim from Cloud Imperium Games has made a habit of standing in the limelight of the gaming world for quite some time now. Wing commander, Chris Roberts shared in a one hour chat with TweakTown that Star Citizen will natively support 4K and 8K UHD resolutions thanks to the PC exclusive approach which allows developers to channel all their efforts on one gaming platform. “I don’t care about consoles,” Roberts said. Clearly, the team behind this massive crowdfunded project is aiming to deliver the best 4K and 8K ultra high resolution textures for future UHD displays.

Developers are striving to “push the boundaries of the DirectX 11 and Mantle application programming interfaces,” according to Star Citizen lead man. The game is set to launch in two or three years apparently, and at the time of its release, DirectX 12 and improved Mantle APIs will be available, which is an interesting prospect, as we’ll be able to see the high-end extent of Star Citizen after benefiting from more advanced technology in its development process. Watch the full TweakTown interview below if you find the time.

I’ve personally been a fan of this massive title ever since I wrote my first Star Citizen article. I love the fact that Chris Roberts and his team are trying to break the mold and bring something unique to the space sim genre both in terms of gameplay complexity and high-end graphics implementation. Currently, many titles have been designed to run above 1080p resolutions, a few supporting 4K UHD resolutions, but Star Citizen is bound to be the first game to natively feature 8K UHD support, and will surely employ non-magnifying textures (textures that do not get blurry) at 7680 x 4320 resolutions when a player gets very close to in-game surfaces. This will be possible by utilizing massive texture sizes.

Star Citizen will introduce 4096 x 4096 and 8192 x 8192 UHD textures which means that environment objects will look just as good from up close as they will from afar. This type of ultra high-end approach might point out that developers are looking far into the gaming future where a powerful PC may be required to pack a tri or quad GPU in order to fully handle 8K resolutions.

So far, Star Citizen has a 20GB size in its early development stage, and in a few years time we might be looking at a 100GB+ considering the massive amounts of detail being poured into the game. Most likely, SSD drives will be a must to ensure a smooth gameplay experience. That being said, Star Citizen has the makings of a stunning title which will take us for a long space ride at the time of its launch.

I'm Razvan, a sports and first-person shooter enthusiast. I've always loved writing, even more so when it involves games. When I'm not playing on my PS3 or writing, I like to run exhausting cardio workouts, play soccer, watch a good movie, or read a good book.
Previous The first ever Heroes of the Storm invitational tournament will take place at Blizzcon 2014 this weekend
Next Mass Effect 4 news at N7 Day? “We shall see…” says Bioware