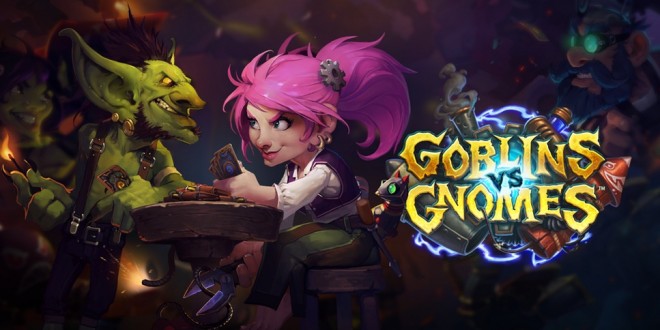 Blizzard announced the first full fledged expansion pack for Hearthstone and it’s all about the Goblins and the Gnomes. While Curse of Naxxramas was merely an “Adventure”, this is a an expansion in the real sense of the word and comes with over 120 new cards to add to your collection. As you might imagine, these cards feature all sorts of crazy contraptions and effects that are more often than not completely random. Hearthstone players that think they have mastered the metagame will be in for a real shock when Goblins vs Gnomes kicks in. The specific release date has not been announced, but Blizzard says that we should expect the new expansion as early as next month.

As for the new cards, the company already detailed a few and some of them are rather unorthodox, to say the least. Among the more ridiculous ones we find the likes of the Explosive Sheep, a 1/1 minion that deals 2 damage to all other minions when it dies. I can already see myself as a Mage playing this card and destroying it with the hero ability just so I can deal two damage to my opponent’s minions. Another peculiar addition to Hearthstone comes in the form of the Annoy-o-Tron. True to its name, this card is a 1/2 with Taunt and Divine Shield, so you’ll likely use this card to troll your opponent. A few other notable mentions from the Goblins vs Gnomes roster include: the Madder Bomber (Battlecry: Deal 6 damage randomly split between all other characters), Sneed’s Old Shredder (Deathrattle: Summon a random legendary minion), and the upcoming most imbalanced card in Hearthstone: V-07-TR-0N (4/8, Can attack four times a turn).

Goblins vs Gnomes also comes with a new game board, a Spectator mode, and a new minion type – Mech. You will be able to purchase Hearthstone: Goblins vs Gnomes cards from the shop with either in-game gold or real money for the same price that you would purchase a regular Expert card pack. Alternatively, you can win them by competing in the Arena game mode. More details related to the pricing will be revealed in the coming weeks.

I’m Load The Game’s co-founder and community manager, and whenever I’m not answering questions on social media platforms, I spend my time digging up the latest news and rumors and writing them up. That’s not to say I’m all work and no fun, not at all. If my spare time allows it, I like to engage in some good old fashioned online carnage. If it’s an MMO with swords and lots of PvP, I’m most likely in it. Oh, and if you’re looking to pick a fight in Tekken or Mortal Kombat, I’ll be more than happy to assist! Connect with me by email markjudge (@) loadthegame.com only
@@MarkJudgeLTG
Previous Starcraft 2: Legacy of the Void cinematic, new multiplayer units and changes
Next Blizzard finally announces a new IP and it’s calling it Overwatch

We live in a world that is constantly trying to keep up with technology. Social ...