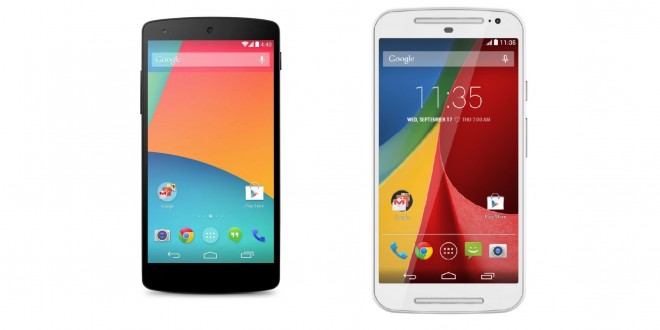 The new Motorola Moto G was first introduced at IFA Berlin in September and all of us were amazed at how such a cheap device could become so popular. Truth is, the Moto G sports excellent bang for buck ratio and has received many positive reviews all around the world. The Nexus 5, on the other hand, has the same history behind it. When Google launched the flagship, it quickly became the best stock Android smartphone with a low price and great support from Google. Since both phones have become hits of the year 2014, we suppose that comparing them would be an enjoyable feat.

The Motorola Moto G and Nexus 5 have many difference and many things in common, but both were most appreciated because of their low price and great specs to boast with. The Nexus 5 camera was a bit disappointing, and the Moto G was faced with the same negative comments about camera performance. Otherwise, the drawbacks of the Moto G is the low internal storage space and the extra cost you have to pay for the microSD and 4G versions of the phone. The Nexus 5 has similar drawbacks, such as no microSD expansion and just an average battery life that can be cumbersome at times. But it does receive updates directly from Google and should be among the first ones to receive the Android 5.0 Lollipop update. The LG G3 might be faster in this respect according to the company, but a release date for the Android 5.0 Lollipop update for the Nexus 5 and other Nexus and Google Play Edition devices is set for November 12. Let’s get right to it and detail some specs and features of each phone, so you can see the differences and similarities between the Nexus 5 and Moto G closely.

Both the Motorola Moto G and Nexus 5 will be getting Android 5.0 Lollipop sooner or later and supposedly, they will receive some minor tweaks and upgrades that will benefit performance and usability. As you can see, the Nexus 5 is the superior phone here, but take into consideration the fact that the Nexus 5 was a 2013 flagship, while the Moto G is a 2014 budget mid-ranger. With this in mind, we can honestly say that both these phones offer excellent bang for buck ratio and no matter which you choose, you certainly won’t be disappointed. If you are more of a power user, the Nexus 5 should suit you better with its superior CPU and display, but you should hurry up because Google isn’t selling them and there are only so many units on Amazon and eBay. As for the Motorola Moto G, it’s definitely the best budget smartphone of the year, with excellent specs paired with a great starting price. I would say that this comparison results in tie, because in their respective categories, the Motorola Moto G and Nexus 5 absolutely rule. Naturally, they have been outdone since their initial release, but that doesn’t mean that they are inferior phones.

My life-long dream has been to test out every gadget on the market! Considering the fact that I've rapidly destroyed almost every gadget I've had so far, I'm not inclined to owning something, so my ideal outcome would be to have a different gadget each month. I'm really into smartphones, wearables and tablets and I love Playstation and Xbox, I'm sure I'll beat you at your own game (after a month of training... or two)
Previous Samsung making 6 inch 4K display for the Note 5
Next Asus prepares its ROG Poseidon GTX 980 Hybrid Air/Water Cooled graphics card