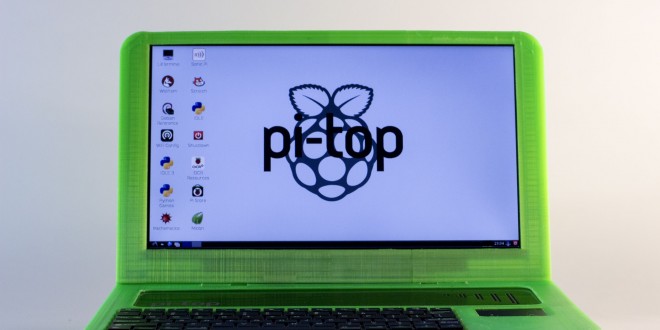 3D printing has become one of the most appreciated technologies of the modern age because it makes the manufacturing process easier, safer and cheaper. While we’ve already seen 3D printed cars, the time has come to build more and more electronic devices. The Pi-Top laptop is one of those simple tasks a modern 3D printer can actually do. Pi-Top is the world’s first 3D printed laptop computer and should be launched in May 2015.

The Pi-Top can be 3D printed with any printer you can find, but that’s the issue with it at the moment. While it would be very cheap to make, the Pi-Top requires a 3D printer, which are not so easy to come across around the world. If you are set on taking advantage of the technology, however, you can find a basic 3D printer for around $350 in various online stores. While you would need a sizable printer to get the Pi-Top to fit, it would be a pretty good investment, to be honest. The Pi-Top kit costs around $280 and includes a template that you use with the 3D printer. This template tells the printer how to build the actual Pi-Top from thin sheets of plastic.

I’m guessing that you were thinking about the other parts a laptop requires in order to work, like a circuit board and a screen. The Pi-Top kit naturally includes these things in the form of a Raspberry Pi circuitry and an LCD screen. You can find the Pi-Top on Indiegogo and the project has already riled up quite the hefty number of orders. Even though the Pi-Top should come across as a completely functioning, average laptop computer, developers Ryan Dunwoody and Jesse Lozano created the model based on the Raspberry Pi philosophy. By assembling the Pi-Top, people could learn about how laptops work and how the Raspberry Pi works and would learn, in time, to make their own. During the process of assembly, users also learn hardware design and learn that they should never put all the screws in the same place. Dunwoody and co. are pretty passionate about the philosophy behind the Pi-Top:  “Instead of just using the laptop as a device that you type into, with this one you can understand how the screen actually works, how the battery gets charged and how it switches between the battery and mains power supplies. If something breaks, you can instantly fix it. A lot of parents are buying it for their kids because they see it as a really good way for them to start understanding the technology behind the devices they are using every day.” ·

My life-long dream has been to test out every gadget on the market! Considering the fact that I've rapidly destroyed almost every gadget I've had so far, I'm not inclined to owning something, so my ideal outcome would be to have a different gadget each month. I'm really into smartphones, wearables and tablets and I love Playstation and Xbox, I'm sure I'll beat you at your own game (after a month of training... or two)
Previous Nvidia says that the Glory Days of Consoles are over, PC is king
Next Top 5 must-play wild west-themed games

Laptops have become a legit way to game alongside the standard gaming PC. They give ...