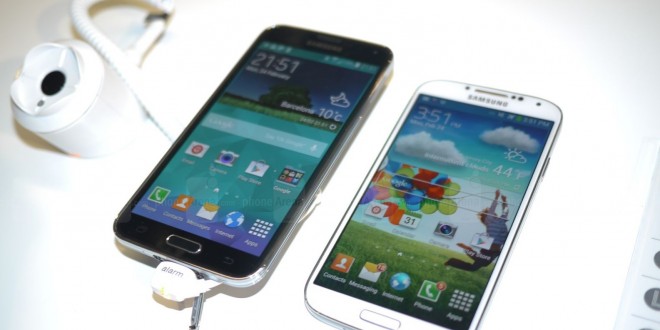 Galaxy S4 vs Galaxy S5 - what are the improvements

Galaxy S4 vs Galaxy S5 – what are the improvements

First off, let’s talk about the design of both Samsung flagships. Neither the Galaxy S4 or the Galaxy S5 have inspiring designs, and most people tend to gravitate towards neither, because they look cheap. The cheap look of the Galaxy S4 and Galaxy S5 is due to their polycarbonate chassis and faux metal finish on the frame. If you’ve seen used flagships from Samsung, you probably know that the faux chrome finish on the frame is the first one to go, leaving your phone unaesthetic-ally scarred. Aside from the design, both flagships can boast with great specs and cameras, as well as a pretty decent battery life.

On the other hand, both have TouchWiz UI on top of Android KitKat, which might put some of you off. TouchWiz isn’t exactly the favorite UI on the planet, but there are many people and tech enthusiasts out there who like it. That being said, don’t say no until you’ve tried it. One big issue with the original model of the Galaxy S4 is that it doesn’t have LTE, which is a major issue. But there is the Galaxy S4 Active and various other Galaxy S4 models which do have LTE, so always check the box for the correct version of the flagship. Let’s get on to the specs!

There’s not that big of a price difference as you’ve probably noted between the two flagships, but the Galaxy S5 clearly offers more features and a better CPU. That being said, I still wouldn’t upgrade to the Galaxy S5 because the features it offers remain unused by most smartphone enthusiasts, but they are helpful, no doubt. The extra features I’m talking about is the fingerprint sensor and the heart rate sensor. These features aren’t really used because the fingerprint sensor, for example, isn’t as easy to use as one would imagine, while the heart rate sensor doesn’t really come in handy unless you’re in a special situation. Nonetheless, the Galaxy S5, compared to the Galaxy S4 does offer IP67 certification and a better processor, which would come in handy for those of you who love to game and tend to hang around dusty and wet spots.

The Galaxy S4 is also smaller and lighter than the Galaxy S5, not sacrificing any display in the meantime. That means that for those of you who like smaller and easily maneuverable phones, the Galaxy S4 would be a better fit. Nonetheless, the Galaxy S5 is a bit more solid and has a better construction than its predecessor. It also has a bigger battery which makes for slightly more minutes of mixed use per day. At the same time, the Galaxy S5’s slightly superior processor makes for faster interaction with the phone, even though the S4 didn’t have issues with speed. Overall, the Galaxy S5 is a better version of the Galaxy S4, but if you already own an S4, you shouldn’t upgrade just yet, it would be better if you waited to see the Galaxy S6, which is much more promising. If you are thinking about changing phones, a buyer’s guide would say the Galaxy S5 would be the better option, because it’s not that much more expensive and you do get more out of it. Which would you choose?

My life-long dream has been to test out every gadget on the market! Considering the fact that I've rapidly destroyed almost every gadget I've had so far, I'm not inclined to owning something, so my ideal outcome would be to have a different gadget each month. I'm really into smartphones, wearables and tablets and I love Playstation and Xbox, I'm sure I'll beat you at your own game (after a month of training... or two)
Previous Leaked Specs of the Radeon R9 390X reveal 4GB of 3D Stacked HBM and 4096 Stream Processors
Next Overwatch will not feature a single-player campaign, but there will be a plot according to Blizzard