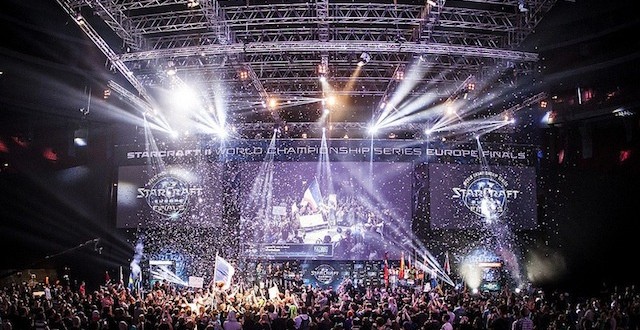 In recent years Electronic Sports have become ridiculously popular even among people who weren’t much into gaming before. I’ve dabbled in competitive gaming on more than one occasion and I can’t begin to tell you how glad I am to see that we live in a time when it’s finally being taken seriously. But things are not equal in the world of eSports and some games are clearly more popular than others. Whether you like them or not, it’s hard to deny the impact these games have on the gaming industry, and the eSports scene would definitely not be the same without them. With that in mind, I’ve compiled a short top 5 list of the most popular eSports games right now. Check it out below.

Blizzard Entertainment is infamous for making games that are easy to get into and can appeal to a very wide audience. This isn’t always easy given that some genres are way more popular than others, but that didn’t stop the company from trying. Still, a collectible card game doesn’t usually pop into mind when thinking about eSports games, which is why Hearthstone didn’t look like it was gonna make it very far when it was first announced. Against all odds, the game was embraced by casual and competitive players alike and is now one of the most popular eSports around even though it’s less than a year old. More than 20 million people are already playing Hearthstone and the numbers seem to keep growing with each passing day. By making Hearthstone extremely simple to learn but very difficult to master, Blizzard once again created a game that’s here to stay and thrive on the eSports scene.

4. Starcraft 2: Heart of the Swarm

This franchise has been at the forefront of true competitive gaming pretty much since the beginning. Starcraft 2 is undoubtedly a great sequel to the legendary first installment and its highly praised expansion, Brood War. However, there are a plethora of eSports games right now and a handful have managed to become much more popular than SC2. Perhaps it’s due to the fact that the real-time strategy genre is a dying breed these days, with very few representatives still around. Starcraft 2: Heart of the Swarm is the best RTS at the moment and the only one that’s popular among eSports fans, so it’s no surprise that it made this list. Hopefully the upcoming Legacy of the Void expansion will be able to give it a boost because at the moment HotS is unfortunately on the decline.

Similar to the original Starcraft, the original Counter-Strike was also on most people’s favorite games list back in the day. The game was still being played by countless people many years after its launch until in 2012 Valve finally decided that it was time for something new. Counter-Strike: Global Offensive was clearly created with eSports in mind and it definitely didn’t disappoint because it’s currently among the most popular ones out there. The fact that Call of Duty Advanced Warfare is fresh and still doesn’t have a well fleshed eSports scene helped Counter-Strike: Global Offensive reach its goal of becoming the most popular competitive shooter around. Things may or may not change once CoD will be ready to re-enter eSports with Advanced Warfare, but for now CS:GO is the only shooter in town if you’re interested in watching heart-pounding action at a professional level.

Featuring a jaw-dropping prize pool of almost $11 million, the Dota 2 International 2014 set a new record for eSports earlier this year. What’s even more impressive is that more than $9 million were little by little raised by the game’s players. Prize money aside, Dota 2 gained its popularity thanks to its loyal community comprised of hardcore MOBA fans. This is arguably the most difficult game in a genre that took the eSports scene, as well as the gaming industry by storm a few years ago and hasn’t looked back since. As opposed to most other games, Dota 2 is not only hard to master, but actually hard to learn, although it still does a much better job at it than the original Defense of the Ancients. But while its predecessor can be credited with inventing the genre, Dota 2 is here to take it to the next level by making the game fun to watch but still as intimidating to actually play it yourself. Although I’d recommend this game in a heart beat to anyone looking for a hardcore competitive experience, I would advise anyone who is new to the MOBA genre to first learn the ropes with the number one game on this list.

Hate it or love it, Riot’s League of Legends is without a doubt the most popular eSports game around. Aside from taking pride in coining the term “MOBA”, LoL  can also boast with its absolutely massive player base. We all though that World of Warcraft was crazy popular at the peak of its glory and we weren’t wrong, but this game is really in a class of its own when it comes to popularity. The exact formula for League of Legends’ popularity is hard to pinpoint, but the fact that it’s less “scary” than most other eSports games out there probably has something to do with it. The learning curve is pretty smooth here and you can quickly become decent at the game without spending countless hours playing it. There’s less depth in terms of gameplay compared to Dota 2, but there’s also less farming, item building, and hour-long games. People ideally want to see non-stop action and League of Legends does a very good job at providing that.  There are arguably much better eSports games out there, but there’s no denying that this is by far the most popular one around and I don’t see that changing anytime soon.

I’m Load The Game’s co-founder and community manager, and whenever I’m not answering questions on social media platforms, I spend my time digging up the latest news and rumors and writing them up. That’s not to say I’m all work and no fun, not at all. If my spare time allows it, I like to engage in some good old fashioned online carnage. If it’s an MMO with swords and lots of PvP, I’m most likely in it. Oh, and if you’re looking to pick a fight in Tekken or Mortal Kombat, I’ll be more than happy to assist! Connect with me by email markjudge (@) loadthegame.com only
@@MarkJudgeLTG
Previous Elite: Dangerous gets a release date
Next Call of Duty: Advanced Warfare benchmarked on the Geforce GTX 650

Esports has been around for a while but not too many people gave it attention ...