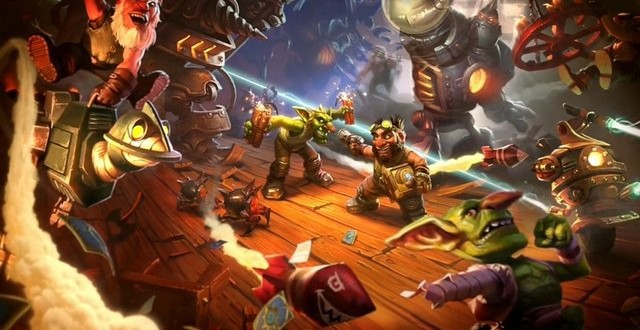 Trump shares his toughts on the upcoming Hearthstone expansion, Goblins vs Gnomes

This past weekend at Blizzcon we were treated with a host of very exciting announcements ranging from Blizzard’s new IP Overwatch to the “Looking For Group” World of Warcraft documentary and everything in between. Blizzard also unveiled the first expansion pack for Hearthstone dubbed Goblins vs Gnomes which brings more than 120 new cards to the game. Most of these cards will come with all sorts of random effects that are certain to shake up the Hearthstone metagame. A lot of players are understandably concerned that the game will be based more on luck than on skill after the expansion kicks in, but not everybody is of the opinion. Trump who is widely considered to be the most well known Hearthstone player in the world seems pretty excited to test all the new cards that are coming with Goblins vs Gnomes.

“Well, I mean, the first impression with almost any expansion is just, “Oh, boy, there are new cards” and that’s pretty much everyone’s reaction—they really like to see more cards,” Trump told Gosu Gamers. “This one has, I’m not going to say any mind-blowingly good or bad or strange cards, but they’re just solid cards. I like, in particular, the piloted ones that were shown off so far, because they bring a little bit of Arena into Constructed. In Arena, you have to think on your feet, and when you’re playing this piloted card—which summons a random 2-mana or 4-mana minion—you’re going to have to get into situations that you don’t often get into. That’ll be where the “think-on-your-feet” Arena skill comes in, I’d say. ”

The famous player doesn’t seem too bothered about the fact that Hearthstone has a lot of randomness. He mentions that this is actually the beauty of the game and it’s what makes it interesting. Hearthstone is not meant to be like a game of chess where you can precisely calculate the moves needed to win, but rather a “high-luck, high-skill” game, similar in many ways to poker. What’s more, luck and randomness don’t usually get to decide a match as a skilled player will pretty much always win against a new player even if they both have the exact same cards. As a testament of how wonderful Hearthstone randomness can be, Trump gives us the Shaman as an example. The ability of this class is to randomly summon one of four different totems. This means that you have to take multiple scenarios into consideration because you don’t know what totem you’re going to summon.

As for the upcoming Hearthstone expansion, Goblins vs Gnomes is scheduled to arrive sometime next month. More details on the release date and pricing are expected to be announced in the following weeks.

I’m Load The Game’s co-founder and community manager, and whenever I’m not answering questions on social media platforms, I spend my time digging up the latest news and rumors and writing them up. That’s not to say I’m all work and no fun, not at all. If my spare time allows it, I like to engage in some good old fashioned online carnage. If it’s an MMO with swords and lots of PvP, I’m most likely in it. Oh, and if you’re looking to pick a fight in Tekken or Mortal Kombat, I’ll be more than happy to assist! Connect with me by email markjudge (@) loadthegame.com only
@@MarkJudgeLTG
Previous Lumia 830 vs Xperia Z3 – price, specs and features compared
Next Nvidia Shield Tablet vs Nexus 9 – bang for buck