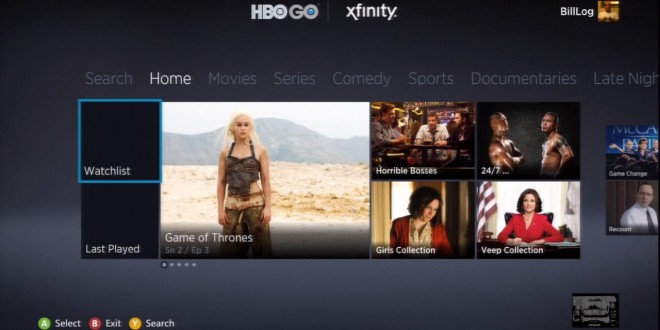 The Xbox One will have a new and much welcomed app today as HBO Go launches on the system. HBO Go has been an app missed by many Xbox One users, as it was present on the 360, but has been missing on the Xbox One version up until now. The HBO Go app will bring the Xbox One a step closer to being an all in one system, as the Go app is a great media feature to have.

The official news comes from Xbox themselves. The HBO Go app will also feature voice commands and gestures on the Kinect to ease use and search catalogs. While the site also states “Now you can get every episode from every season of your favorite HBO shows right on your Xbox One.*” It appears as if many shows are available, but the asterisk does leave some concerns. As of now though it seems you can watch every episode of Boardwalk Empire, Sopranos, Game of Thrones, True Detective, Girls, and Entourage. While I am sure there are plenty of other shows on the HBO App, these are the ones mentioned on the site.

Christopher is a Contributor at Load The Game and a Community Manager for Project Extract. If he isn't writing about games or playing games, then he's more than likely thinking about, you guessed it, games. Christopher prefers RPGs over all, but isn't opposed to jumping in to just about anything.
@Reaperchris13
Previous Far Cry 4’s map editor gets its own trailer
Next Shadow of Mordor gets a new skin and challenge mode for free