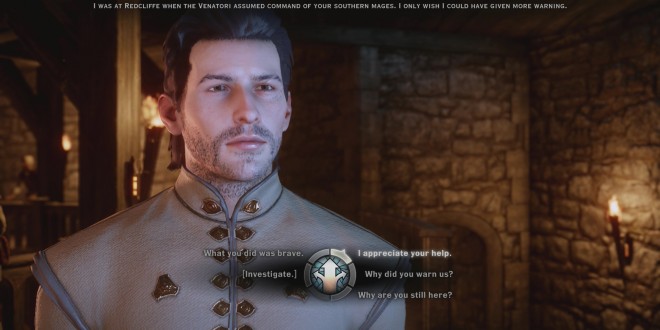 Bioware have always been well accomplished at allowing their players to make their own choices, in dialogue and gameplay. The first thing  that I noticed with Inquisition is that the dialogue is limited in the choice that it offers the player. You have the standard good, bad and neither dialogue options (without the paragon and renegade options) but they’re so cliche. For instance when you’re trying to be “good” you could still feel angry about an antagonist killing loads of people, instead you seem stuck mourning and being emotional about it. Which may be okay for some people, that may be how they would respond to it, or maybe even just once or twice but all the time just seems so rigid.

The other characters do not seem to have this problem in their dialogue, they all have their established characteristics and in the dialogue it always comes across well. I have to say I’m a fan of Sera, she’s a brilliant character. But because they’re all already set in their ways, they all only have that one response that they could say really. But what differentiates the player from them is that their back story is being made up on the spot, and their personality has to be able to cater to the thousands of people that will play Inquisition. Which I feel is something that Bioware has achieved better in past titles. The Inquisition story, seemingly unoriginal at first, (only at first) had these standard moments where people would respond in certain ways but I just don’t feel like they got it right.

I do love Inquisition but I always like to try and get my character to come across as myself as much as I can but with the dialogue in Inquisition I feel like I’m choosing a bracket, not choosing what I would actually say. I would be curious to hear what other people have to say about it as none of my friends got the game unfortunately. Sound off in the comments!

I’m Load The Game’s co-founder and community manager, and whenever I’m not answering questions on social media platforms, I spend my time digging up the latest news and rumors and writing them up. That’s not to say I’m all work and no fun, not at all. If my spare time allows it, I like to engage in some good old fashioned online carnage. If it’s an MMO with swords and lots of PvP, I’m most likely in it. Oh, and if you’re looking to pick a fight in Tekken or Mortal Kombat, I’ll be more than happy to assist! Connect with me by email markjudge (@) loadthegame.com only
@@MarkJudgeLTG
Previous Game of Thrones Update – Full Cast Revealed, Story Arc Details
Next OnePlus One Launches in India Soon