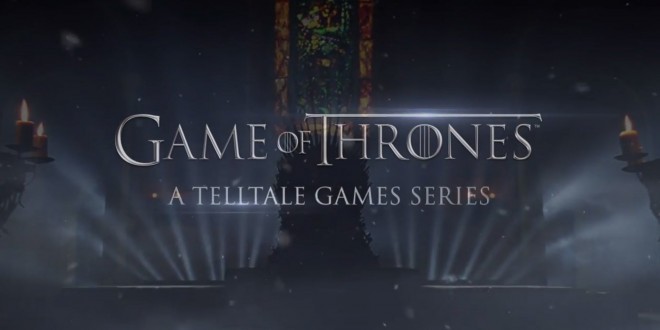 Telltale’s Game of Thrones – Out Next Month

Telltale’s Game of Thrones first episode “Iron From Ice” can be yours a whole lot sooner than expected according to Steam’s listing for the video game adaption of the hugely popular book and HBO television series. Rabid fans can finally try to survive their own Game of Thrones beginning December 2014.

When asked about the release date posted on Steam, a rep for Telltale said: “We’re anticipating an early December premiere for the first episode of Game of Thrones: A Telltale Game Series. Standby @teltalegames on twitter for an announcement expected very soon.”

This is good news as anticipation for Telltale’s take on the Game of Thrones has fans chomping at the bit with updates about HBO cast members’ participation, information about the House of Forrester, the six episode story arc, and more. To discover which HBO actors show you’ll be hearing, dirt on the story arc and to learn more about the House of Forrester, head over here.

The title of the first episode, “Iron From Ice”, comes from the house words of the Forrester family. As the title suggests, the December 2014 release will center around the House of Forrester and get players acquainted with the family from the North who are loyal everyone’s favorite pack, the Starks of Winterfell. The game will let you explore Westeros and its most notable landmarks like King’s Landing, interact with your favorite (or not) characters, and try to survive the War of the Five Kings all as five different playable characters; all of which hail from the House of Forrester.

Winter is coming; are you ready? Check out the Steam listing to see the system requirements for “Iron From Ice” so you can rest easy knowing you’re prepared ahead of Telltale’s announcement of the official release date for part one of six of the Game of Thrones video game.

I’m Load The Game’s co-founder and community manager, and whenever I’m not answering questions on social media platforms, I spend my time digging up the latest news and rumors and writing them up. That’s not to say I’m all work and no fun, not at all. If my spare time allows it, I like to engage in some good old fashioned online carnage. If it’s an MMO with swords and lots of PvP, I’m most likely in it. Oh, and if you’re looking to pick a fight in Tekken or Mortal Kombat, I’ll be more than happy to assist! Connect with me by email markjudge (@) loadthegame.com only
@@MarkJudgeLTG
Previous Star Citizen – Q&A With Tony Zurovec
Next League of Legends now allows you to send gifts to other players at the end of a match