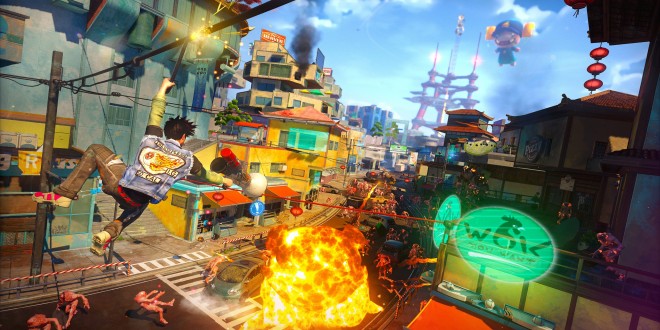 Sunset Overdrive DLC will be available starting today for those who have purchased the game’s season pass. The DLC pack contains four new weapons for player use. Without the season pass the DLC will cost you $4.99 in the Xbox Store. The weapons are: Plague Bomb, Rager, Shield Buddy and Multi-Lock Rocket Launcher. Each weapon has its own unique function although the rocket launcher isn’t as unique as most weapons found in Sunset Overdrive. The Plague Bomb causes enemies to take damage over time and infect other enemies when they explode. The Rager causes your foes to attack each other and also explode when they have taken enough damage. The Shield Buddy is a defensive measure but also has an offensive bomb attack. Lastly the Multi-Lock Rocket Launcher can shoot eight rockets to deal damage to various enemies, and is slightly reminiscent of the RYNO from the Ratchet & Clank series, also developed by Insomniac Games. If you want to see these weapons in action, you can watch a recent livestream with Insomniac Games of the Sunset Overdrive DLC.

Additionally the soundtrack for Sunset Overdrive will be available for purchase on iTunes and includes various songs made for the game including tracks from Boats, Meat Market and Bass Drum of Death. The soundtrack helps the mood of punk rock felt throughout Sunset Overdrive. The Sunset Overdrive DLC wasn’t the only announcement, as Xbox explained that players would be able to vote every other week on new content such as outfits. The content will be distributed freely after the vote ends. The ProPain Launcher will drop more frequently in-game until December 1st and you can now earn 27.9 times more Overcharge while playing the multiplayer mode Chaos Squad. For those still on the fence about Sunset Overdrive, the day one digital edition will only be available with its bonus content until December 1st as well. Although that goes against the “day one” qualifier.

Previous Nexus 6 is both attractive and easy to repair
Next Super Smash Bros. Wii U Sales Surprise