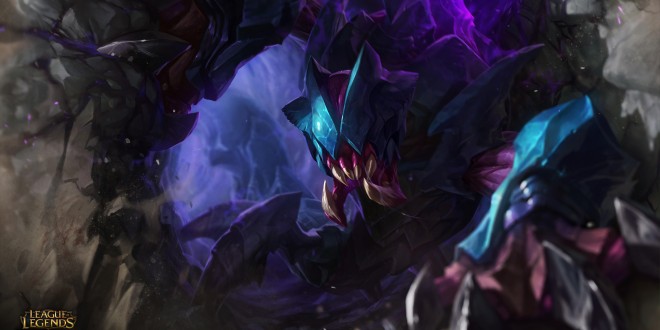 League of Legends now has a new champion added to their massive roster. Junglers rejoice! Meet Rek’Sai (or the Void Burrower as she’s also called), an agile and fast jungler who can dart between camps in Riot’s hugely popular MOBA.

Rek’Sai can travel underground a-la Bugs Bunny and can deliver attacks from her underground tunnels or escape devastating attacks quickly. While tunneling, Rek’Sai the Void Burrower can utilize Tremor Sense which allows her to feel out nearby enemy activity above ground making her a useful addition to the League of Legends lineup.

Rek’Sai’s passive ability is called Xer’Sai and allows her to use fury to either attack enemy champions or to briefly regenerate health while burrowing. Q: for the Void Burrower is called Queen’s Wrath when she’s above ground and Prey Seeker when burrowed. W: is how she burrows underground or bursts forth from her tunnel. E: when used above ground utilizes Furious Bite and when underground has Rek’Sai digging toward a target location with Tunnel. And finally, R: is called Void Rush and passively gives Rek’Sai attack speed and actively gives her a significant burst of movement speed once she emerges from her tunnels.

Riot Games says that Rek’Sai works best with Malphite, Lux and Kassadin while struggling when faced with Ziggs, Kailsta and Lee Sin. While Rek’Sai does not have the most powerful burst damage, she is a huge asset when ganking enemy champions as her burrowing abilities give a new edge to the battles.

The angular blue and purple champion was designed by the wonderfully named Beat Punchbeef at Riot. According to the League of Legends announcement, Riot says that Burrowers and Land Sharks were the two main inspirations when first developing Rek’Sai. But what do you do once you’re underground? Riot realized that you’d be able to feel the vibrations from people stomping around above thus bringing to life Rek’Sai’s Tremor Sense.

Riot has been busy lately as Rek’Sai the Void Burrower is the second champion to be revealed this month and her unveiling comes on the heels of the largest League of Legends update ever, Patch 4.20 that was released on November 20th. Riot is intent on shaking things up during the League of Legends preseason and working to make life better for the millions players world wide by doing things like reducing player toxicity and increasing strategic diversity. With all of the changes Riot Games is rolling out during the preseason, it is definitely shaping up to be an interesting coming season for League of Legends and MOBA fans alike.

I’m Load The Game’s co-founder and community manager, and whenever I’m not answering questions on social media platforms, I spend my time digging up the latest news and rumors and writing them up. That’s not to say I’m all work and no fun, not at all. If my spare time allows it, I like to engage in some good old fashioned online carnage. If it’s an MMO with swords and lots of PvP, I’m most likely in it. Oh, and if you’re looking to pick a fight in Tekken or Mortal Kombat, I’ll be more than happy to assist! Connect with me by email markjudge (@) loadthegame.com only
@@MarkJudgeLTG
Previous Mass Effect: Cheap and Pocket Sized Black Friday sale
Next Persona Q: Shadow of the Labyrinth DLC Schedule Revealed