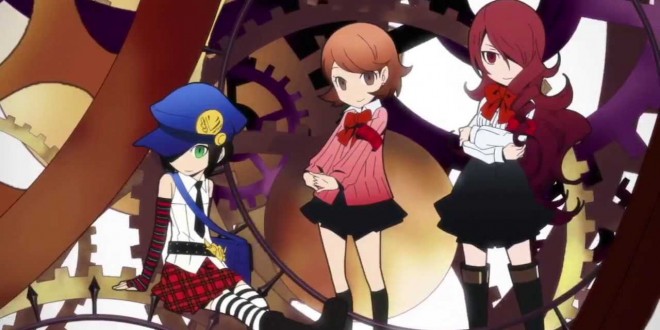 Persona Q: Shadow of the Labyrinth has just released for the 3DS system. Now, we know the DLC schedule, letting us see when the items go on sale and for how much. The first bit of DLC for Persona Q will be a sub-persona. Sub-personas are additional allies that players are able to equip for battle. The first persona, Kaguya, releases today, and will be free for all players. The next batch of DLC, all more sub-personas, will come on December 2nd. The three personas are: Orpheus Telos, Magatsu Izanagi, and Thanatos. The first, Orpheus Telos, will also be free for all Persona Q owners. The other two will run at $1.99.

The sets of following Persona Q DLC are all navigator voices. These downloads let players change the voice of the Labyrinth and Battle navigators, with dialogue and personalities that fit that character’s voice. The first three voices, Margaret, Elizabeth, and Theodore, will come out on December 9th. All three voices will run at $2.99 each. The last two parts of DLC will release on December 16th, and will also run for $2.99 each. The voices that players receive here are Marie and Nanako.

Released today in North America, Persona Q: Shadow of the Labyrinth is a crossover JRPG for the 3DS. The game features characters from both Persona 3 and 4. The title is a dungeon crawler, and borrows elements from the Etrian Odyssey series. The story follows the protagonists of both games, and players are able to choose which of the character’s stories they want to follow. Both sides find themselves trapped inside a high school, and they team up to try and figure out a way to free themselves.

Gameplay for Persona Q has elements of both Persona and Etrian Odyssey titles. While battle does pan out like the Etrian Odyssey games, the use of Personas is thrown into the mix as well. Players are able to explore both the school and labyrinths. At the school, characters are able to interact with each other, heal, and buy gear. Players can then jump into labyrinths with five-man teams, and can explore and battle monsters. The map for the labyrinth is filled in on the bottom screen of the 3DS, and players can add notes to the map.

Persona Q: Shadow of the Labyrinth released today for the 3DS. A European version of the game will release on November 28th.

I’m Load The Game’s co-founder and community manager, and whenever I’m not answering questions on social media platforms, I spend my time digging up the latest news and rumors and writing them up. That’s not to say I’m all work and no fun, not at all. If my spare time allows it, I like to engage in some good old fashioned online carnage. If it’s an MMO with swords and lots of PvP, I’m most likely in it. Oh, and if you’re looking to pick a fight in Tekken or Mortal Kombat, I’ll be more than happy to assist! Connect with me by email markjudge (@) loadthegame.com only
@@MarkJudgeLTG
Previous League of Legends New Champion Rek’Sai Unleashed
Next The Crew: Embargo Lifts After Launch