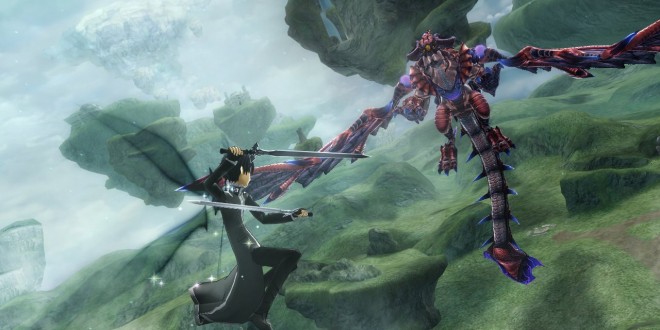 Sword Art Online: Lost Song is an upcoming JRPG releasing in  Japan early next year. Today, two characters were announced to be appearing in the game through Dengeki PlayStation.

The first character that was announced was Philia, who made her first appearance in the series in the PS Vita game Sword Art Online: Hollow Fragment. As Lost Song takes place inside of ALO (ALfheim Online), Philia will be part of the Spriggan race, the same as Kirito. In Lost Song, Philia will no longer have blonde hair like she did in Hollow Fragment, but will instead sport black hair this time around. She works as a treasure hunter, with an all-purpose build skilled with both the dagger and support magic.

The game’s producer has said that the game will be an open-world action RPG featuring an original story set within ALfheim Online, where characters are able to fly. Along with the character confirmations, Dengeki also had a look at the “Desert Golem Hildisvini.” Hildisvini is a huge boss similar to the ones found in the Monster Hunter series that players will have to fight in the sky.

I’m Load The Game’s co-founder and community manager, and whenever I’m not answering questions on social media platforms, I spend my time digging up the latest news and rumors and writing them up. That’s not to say I’m all work and no fun, not at all. If my spare time allows it, I like to engage in some good old fashioned online carnage. If it’s an MMO with swords and lots of PvP, I’m most likely in it. Oh, and if you’re looking to pick a fight in Tekken or Mortal Kombat, I’ll be more than happy to assist! Connect with me by email markjudge (@) loadthegame.com only
@@MarkJudgeLTG
Previous Xbox One and PS4 games will be featuring better graphics in the future
Next Pokemon Omega Ruby/Alpha Sapphire Debut at 1.5 Million Sales in Japan