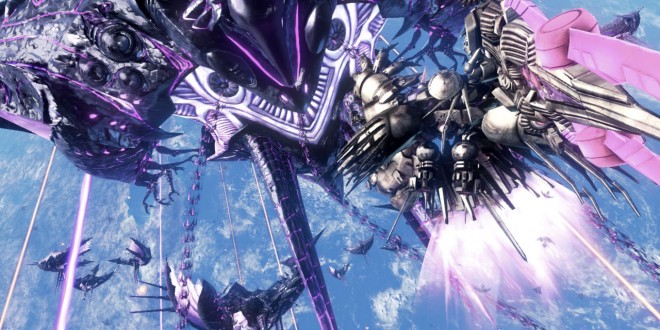 Xenoblade Chronicles X is an upcoming JRPG for the Wii U. Spiritual successor to the hit Wii title Xenoblade Chronicles, we now know what kind of story the title will have. Taking to Twitter, director Tetsuya Takahashi revealed that Xenoblade Chronicles writer Yuichiro Takeda will be tackling the script of the upcoming title. Takahashi had this to say: “After the basic fantasy story for [Xenoblade], we’re having him write a deep and and distinctive sci-fi story this time around.” Takahashi also revealed that composer Hiroyuki Sawano of Attack on Titan fame will compose the music, and that Kunihiko Tanaka from past Xeno games will handle character design.

A part if the Xeno series, Xenoblade Chronicles X is an open-world JRPG. There is an emphasis on exploration, with players traversing the land either on foot or in large humanoid robots called “Dolls.” Dolls are able to fly, go over water, and transform into various vehicles such as motorcycles.

The battle system in Xenoblade Chronicles X will play similar to the system used in the previous game. This time, aerial battles will also take place. The game’s plot will take place in 2054. Two alien races battle it out near Earth, causing significant damage to the planet, making it become inhabitable. Humanity is forced to evacuate the planet in enormous interstellar ark ships in a program called the Earth Species Pan Immigration Program. The story follows the passengers of an American evacuation ship named the White Whale, which crash lands on the planet Mira. The survivors attempt to establish themselves a new home on the planet, all while still being hunted by an alien race.

Xenoblade Chronicles X releases in Japan in Spring of 2015. The game will be a Wii U exclusive, slated for a 2015 release in both North America and Europe.

I’m Load The Game’s co-founder and community manager, and whenever I’m not answering questions on social media platforms, I spend my time digging up the latest news and rumors and writing them up. That’s not to say I’m all work and no fun, not at all. If my spare time allows it, I like to engage in some good old fashioned online carnage. If it’s an MMO with swords and lots of PvP, I’m most likely in it. Oh, and if you’re looking to pick a fight in Tekken or Mortal Kombat, I’ll be more than happy to assist! Connect with me by email markjudge (@) loadthegame.com only
@@MarkJudgeLTG
Previous Shovel Knight Theme Available on 3DS This Week
Next Tales from the Borderlands is Out Now