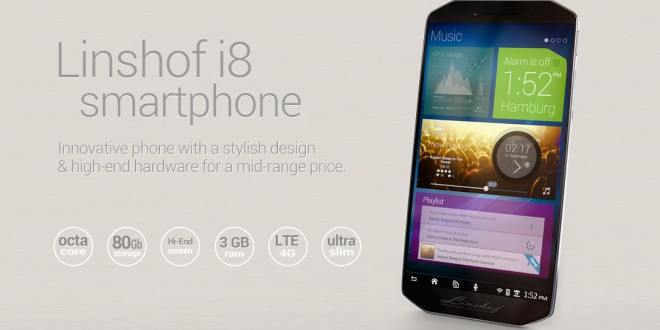 Linshof is certainly not the most appealing smartphone name one can think of, but it is definitely on the fast track of becoming one, as the German made Linshof i8 packs a ridiculous amount of power in a beautifully designed chassis. While the Germans are widely known for their Mercedes and BMWs, now they embrace the smartphone market in style with an impressive device powered by an octa-core CPU, packing a staggering 80GB of internal storage. Moving further down the specs lane, the Linshof i8 features a 5-inch 1080p Super AMOLED/IPS display, and it is fueled by a 32-bit 2.3GHz octa-core processor and 3GB of RAM. 80 GB of internal storage is pretty crazy, right? Well, the coolest part is this huge storage capacity is divided in two segments: the first one carries 64GB, while the second, 16GB.

In typical German fashion, Linshof developers have smartly assigned the 16GB sector for running apps at increased speeds thanks to the high transfer rate it utilizes. From an imaging perspective, the Linshof i8 features a 13-megapixel primary shooter with 28mm wide-angle lens, F1.8 aperture and Sony CMOS sensor, which is not the most high-end unit on the market, but it’s certainly not bad at all. What strikes me the most is the 8-megapixel front-facing camera, which is quite outstanding and worthy of a true flagship. Finally, the Linshof i8 will be powered by a 3,100 mAh camera that will allegedly last more than 24 hours. Other useful features include GPS, Bluetooth v4.0, an electronic compass, a gyroscope, HDMI 1.4 support with 3D, NFC and WiFi/LTE (4G). As expected, the device will run on Android 5.0 Lollipop boosted by a custom hardware-accelerated interface.

The user interface is reportedly a mix between Windows Phone and TouchWiz, showcasing similar tiles, fonts and color options. In terms of pricing, the Linshof i8 will cost $380, which is pretty much a bargain. Linshof announced this high-end smartphone for Q1 2015. The German manufacturer is also expected to release in early 2015 a 10-inch tablet featuring the same design and specs with a 2048×1536 display and 9000mAh battery. To conclude, the Linshof i8 is set to blow the doors off the competition with an incredibly powerful hardware, attractive design and a seriously competitive price.

I'm Razvan, a sports and first-person shooter enthusiast. I've always loved writing, even more so when it involves games. When I'm not playing on my PS3 or writing, I like to run exhausting cardio workouts, play soccer, watch a good movie, or read a good book.
Previous Razer announces eSports documentary about Dota 2, League of Legends, and Starcraft 2
Next The Witcher Adventure Game is now live on PC and mobile devices