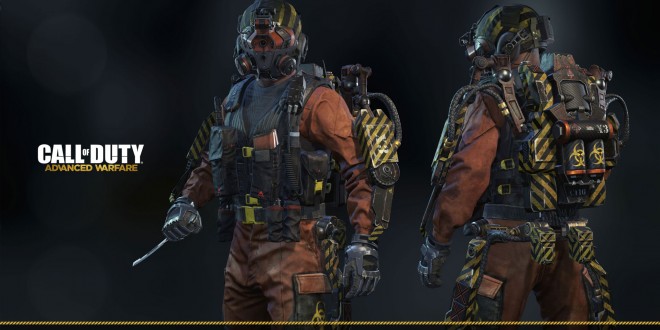 The latest reports indicate that Call of Duty Advanced Warfare already sold more than 10 million copies worldwide despite the fact that it was only launched about three weeks ago. Seeing as how gamers have been so generous, developer Sledgehammer Games has decided that it should return the favor. The company announced that it will send some free exclusive gear to anyone who plays the game during Wednesday November 26th – Monday, December 1st. What’s the catch? Apparently there isn’t one, so all you have to do is log into Call of Duty Advanced Warfare and play for a while in order to be eligible for this reward.

As for the gear, it goes by the name of “Nigerian Command” and it’s a full set of armor that will only be available to those who play Call of Duty Advanced Warfare during this period. This means that you have to hurry if you want to get your hands on this exclusive set as it won’t be available for much longer. Sledgehammer mentions that the “Nigerian Command set is part of the 1000+ pieces of in-game loot that are available to players via Supply Drops. Unfortunately the developer failed to also mention when Call of Duty Advanced Warfare players can expect to receive the set, but presumably it will be sent to them sometime next week.

While Supply Drops may include a lot more loot, the Nigerian Command set is the only one that’s available for free, which makes it even more sought after. The drops themselves are part of the new customization system that was implemented in Call of Duty Advanced Warfare. There are more unique and interesting features in this game, which is why it already managed to sell 10 million copies. Surprisingly, most of these copies (4.26 million) were for the PS4 and not the Xbox One like some predicted, although a fair amount (2.76 million) were indeed sold for Microsoft’s console as well.

I’m Load The Game’s co-founder and community manager, and whenever I’m not answering questions on social media platforms, I spend my time digging up the latest news and rumors and writing them up. That’s not to say I’m all work and no fun, not at all. If my spare time allows it, I like to engage in some good old fashioned online carnage. If it’s an MMO with swords and lots of PvP, I’m most likely in it. Oh, and if you’re looking to pick a fight in Tekken or Mortal Kombat, I’ll be more than happy to assist! Connect with me by email markjudge (@) loadthegame.com only
@@MarkJudgeLTG
Previous Fallout 4 should be set in New Orleans or Florida according to the original devs
Next HTC One M9 specs allegedly leaked by the Chinese media