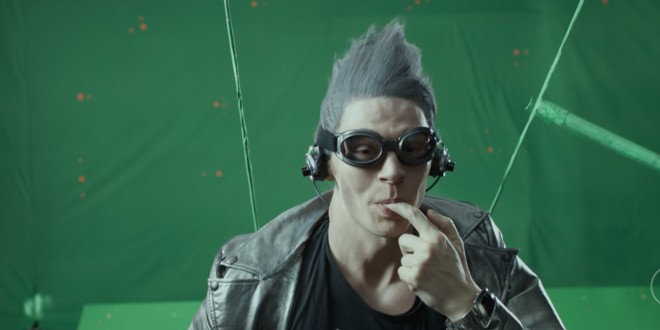 X-Men Days of the Future Past: How Time Stood Still

X-Men Days of the Future Past blasted into theaters this summer and, for me, still remains one of the most remarkable films of the year. (Though, as a lifelong fan of the X-Men comics I may be a bit biased.)

With such iconic characters as Wolverine, Professor X, and Magneto played by equally notable cast members like Jennifer Lawrence, Patrick Stewart, and Peter Dinklage, it’s no wonder that this movie was so impressive. Without a doubt, though, one of the coolest and most memorable characters in the film was Quicksilver.

As the lighting fast young mutant, Peter Evans was undoubtedly a scene stealer with his portrayal of Quicksilver. However, Quicksilver was all the more impressive thanks to the incredible visual effects team that brought his powers to life. Australia based Rising Sun Pictures posted this mind blowing VFX breakdown of one of the most talked about scenes in X-Men Days of the Future Past.

This all too brief three minute clip is just begging for countless rewatches if you want to catch all of the details and work that Rising Sun put into making Bryan Singer’s vision pop on screen. For those of you (poor souls) who have yet to see X-Men Days of the Future Past, the scene that Rising Sun did VFX breakdown for was the first time the audience got to see Quicksilver in action.

Quicksilver, portrayed by Evan Peters, is in a Pentagon kitchen with Wolverine (Hugh Jackman), Magneto (Michael Fassbender), and Professor Xavier (James McAvoy) when they are confronted by guards. The giddy thrill of watching Quicksilver disarm the guards and save three of the most important characters in the X-Men universe while making us chuckle with some boyish pranks was immensely satisfying.

I don’t know about you, but after watching Rising Sun’s top notch VFX work on that scene makes me long for a new and kick ass X-Men video game.

I’m Load The Game’s co-founder and community manager, and whenever I’m not answering questions on social media platforms, I spend my time digging up the latest news and rumors and writing them up. That’s not to say I’m all work and no fun, not at all. If my spare time allows it, I like to engage in some good old fashioned online carnage. If it’s an MMO with swords and lots of PvP, I’m most likely in it. Oh, and if you’re looking to pick a fight in Tekken or Mortal Kombat, I’ll be more than happy to assist! Connect with me by email markjudge (@) loadthegame.com only
@@MarkJudgeLTG
Previous I Am Bread Coming To Early Access
Next Close Castles Will be at the PlayStation Experience

Redbox prices are increasing starting in early December. Video game rentals will go up from ...