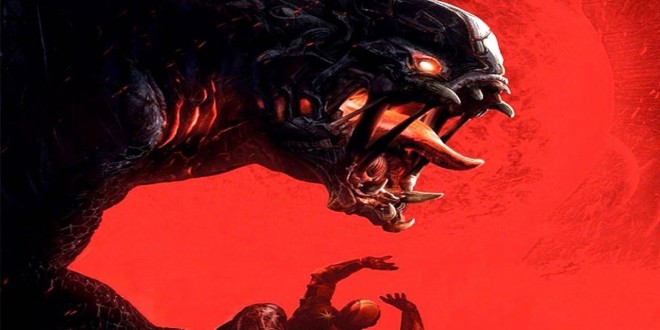 Evolve is an upcoming asymmetrical multiplayer shooter that puts a team of four hunters against an ever growing monster. Ahead of the game’s release, 2Kgames has put out a trailer (seen below) showcasing the game’s story.

In Evolve, players play as hunters that are sent to a colony infested with giant monsters. Their job is to help evacuate the colony after much of it was destroyed by the beasts. The trailer also showcases some of the action gamers can expect from  the game, and gives a quick peek at one of the monsters at the end. This monster was the one that developer Turtle Rock Studios asked players to name at the end of November. The four names for players to choose from were: Juggernaut, Titan, Colossus, and Behemoth. Turtle Rock has not yet revealed which name received the most votes.

A take on squad based multiplayer, Evolve pits four players controlling hunters against a human controlled monster. As the game progresses, the monster will constantly grow, eventually becoming a massive behemoth if not taken out early. Players are able to choose from 4 classes: assault, trapper, support, and medic. There will be a number of monsters to choose from as well. So far two of the playable monsters have been revealed in Evolve: the Kraken and Goliath. Recently Turtle Rock Studios co-founder Phil Robb confirmed that those who do not own all of the DLC can still play with those who have purchased all of the packs. Those who do not own the packs will not be able to pick those hunters and monsters themselves, but will still be able to play in the same matches as those characters.

Evolve will release on February 10, 2015. The game will be available on PC, Xbox One, and PlayStation 4. Those who preorder the game will receive the Monster Expansion Pack, which will give those gamers a new monster for free when it becomes available.

I’m Load The Game’s co-founder and community manager, and whenever I’m not answering questions on social media platforms, I spend my time digging up the latest news and rumors and writing them up. That’s not to say I’m all work and no fun, not at all. If my spare time allows it, I like to engage in some good old fashioned online carnage. If it’s an MMO with swords and lots of PvP, I’m most likely in it. Oh, and if you’re looking to pick a fight in Tekken or Mortal Kombat, I’ll be more than happy to assist! Connect with me by email markjudge (@) loadthegame.com only
@@MarkJudgeLTG
Previous Super Smash Bros. Players Reporting Error Code Problem
Next Guilty Gear Xrd Sign’s Limited Edition Will be Delayed