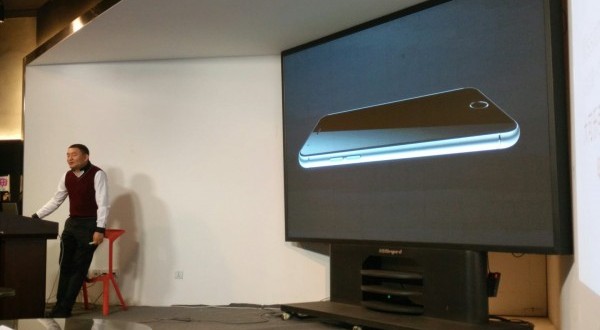 Want an iPhone 6 but can’t afford one? Don’t worry because now there’s a very good alternative to Apple’s highly sought after flagship smartphone and it won’t end up costing you an arm and a leg. You probably noticed by now that the Chinese like to make copies of existing products and put their own spin to them. A lot of the time these products are of lower quality compared to the original, although there are a few exception every once in a while. The strangely named Dakelele Big Cola 3 is one such exception. This device is almost one hundred percent identical to the iPhone 6 in terms of design, but comes equipped with some better hardware and is much cheaper.

The only thing this phone is missing is the Apple logo on its back, which isn’t really that important anyway even though I hear that it’s a main selling point for some. At any rate, the Dakelele Big Cola 3 features a different logo but everything else is pretty much the same on the outside. On the inside however, this iPhone 6 replica pretty much puts the original to shame with its 5-inch 1080p resolution display and 64-bit MediaTek MT6752 chipset complete with octa-core processor clocked at 1.7 GHz and 3 GB of RAM. The iPhone 6 look-alike also features a 13 MP primary camera along with an 8 MP front-facing shooter – both manufactured by Sony – and 16 GB of internal storage memory with microSD support that can hold up 128 GB of additional memory.

Interestingly, the Dakelele Big Cola 3’s display is covered in sapphire glass, a feature that Apple also promised for the iPhone 6 but never managed to provide. While the Chinese smartphone is arguably better in pretty much every way than the original, iOS fans will likely not find it very appealing as it doesn’t run on Apple’s operating system. Instead, the device comes straight out of the box with Android 4.4 KitKat. Yes, this is in fact an Android iPhone 6. While everything about this phone is overall great, the price tag is actually pretty ridiculous at only about 243 bucks. There is a catch though. The Dakelele Big Cola 3 is currently only available in China and will probably remain that way for the foreseeable future.

I’m Load The Game’s co-founder and community manager, and whenever I’m not answering questions on social media platforms, I spend my time digging up the latest news and rumors and writing them up. That’s not to say I’m all work and no fun, not at all. If my spare time allows it, I like to engage in some good old fashioned online carnage. If it’s an MMO with swords and lots of PvP, I’m most likely in it. Oh, and if you’re looking to pick a fight in Tekken or Mortal Kombat, I’ll be more than happy to assist! Connect with me by email markjudge (@) loadthegame.com only
@@MarkJudgeLTG
Previous Motorola’s Droid phablet will look similar to the Nexus 6, but sport better specs
Next iPhone 6 Sales Erode Android Market Hold