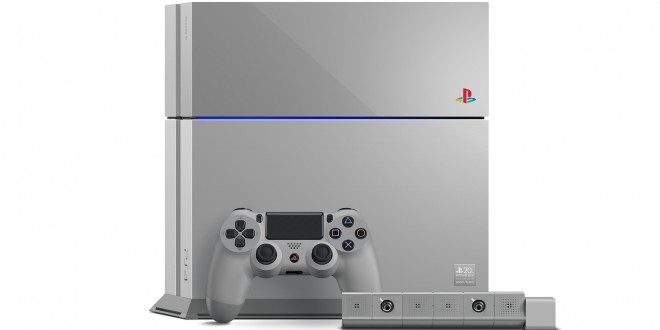 Today’s post on Sony’s PlayStation Blog revealed the design of the 20th Anniversary Edition PlayStation 4. Right off of the bat it is clear that this new iteration of the PS4 pays homage to the iconic PlayStation One. Even the controllers feature the grey and black color scheme that we all know and love. In addition to drool worthy pictures of perhaps the rarest PlayStation 4 to date, PlayStation Blog also included this unboxing video:

Feeling like Fry from Futurama and are saying “shut up and take my money!” after watching that unboxing video? The 20th Anniversary Edition PlayStation 4 consoles are being sold for $499. Sony also gave fair warning to PlayStation fans in North America by stating that the 20th Anniversary Edition PS4 will be available in extremely limited quantities in the United States and Canada.

Canadian and American residents that would like to pre-order the 20th Anniversary Edition PlayStation 4 should check out the PlayStation Experience keynote on Saturday, December 6th at 10:00 am Pacific (or 1 pm Eastern) for more details on how they can nab the “original grey” PlayStation 4.

For those of us that will not be lucky enough to get our hands on the PlayStation 4 20th Anniversary Edition, Sony has made sure that we would not be left out of the 20th birthday celebrations.

How’s that for a 20th birthday celebration?

I’m Load The Game’s co-founder and community manager, and whenever I’m not answering questions on social media platforms, I spend my time digging up the latest news and rumors and writing them up. That’s not to say I’m all work and no fun, not at all. If my spare time allows it, I like to engage in some good old fashioned online carnage. If it’s an MMO with swords and lots of PvP, I’m most likely in it. Oh, and if you’re looking to pick a fight in Tekken or Mortal Kombat, I’ll be more than happy to assist! Connect with me by email markjudge (@) loadthegame.com only
@@MarkJudgeLTG
Previous Samsung Galaxy Note 4 captures all four seasons in a breathtaking 4K video
Next Motorola’s Droid phablet will look similar to the Nexus 6, but sport better specs