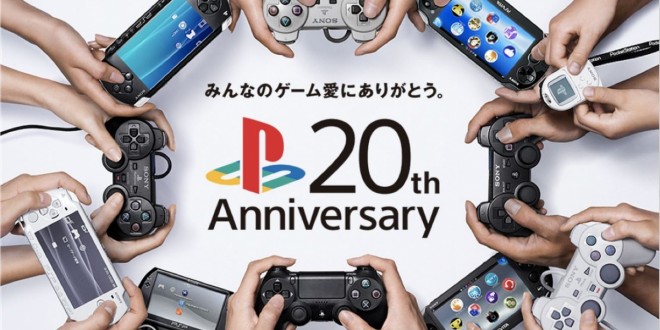 Sony PlayStation was released 20 years ago today on December 3rd, 1994. The 20th anniversary of PlayStation does two things to a person: make you feel really old and make you think back on the history of PlayStation and its impact on the gaming world. Many aren’t aware, but PlayStation actually got its start as an addition to the Nintendo Super Famicon. (The Famicon was known to those of us in the United States as the Super Nintendo.) All was not well in the marriage between Sony and Nintendo, and they eventually parted ways after several years of collaboration thanks to a contractual dispute that led to Nintendo reneging on their deal.

After listening to “I Will Survive” on repeat, Sony decided to release PlayStation on its own. Sony’s PlayStation finally made it to the West by fall of 1995 but it wasn’t exactly an empty market that they were entering. Super Nintendo, the Sega Saturn and eventually, the Nintendo 64 all went up against the plucky PlayStation console. Sony was able defeat its competing consoles just by the massive numbers it sold. With figures that would make the Toasty! Guy from Mortal Kombat weep tears of joy, PlayStation outpaced the Nintendo 64 3-to-1 and Sega Saturn by 10-to-1. (Toasty, indeed.) In fact, the first generation of PlayStation sold over 102 million units over the course of its lifespan. (And yes, these figures do include the PS One redesign.)

In fact, PlayStation’s market saturation has been so impressive that it makes it the second best in-home gaming console of all time beaten only by its little brother, the PlayStation 2. You can hop on twitter and check out #20YearsOfPlay to see everyone’s favorite moments with their PlayStations. Twitter’s PlayStation nostalgia not enough for you? You can also head over to PS Europe’s Blog to check out the highlights from their 20 hour celebration in honor of PlayStation’s 20th birthday.

I’m Load The Game’s co-founder and community manager, and whenever I’m not answering questions on social media platforms, I spend my time digging up the latest news and rumors and writing them up. That’s not to say I’m all work and no fun, not at all. If my spare time allows it, I like to engage in some good old fashioned online carnage. If it’s an MMO with swords and lots of PvP, I’m most likely in it. Oh, and if you’re looking to pick a fight in Tekken or Mortal Kombat, I’ll be more than happy to assist! Connect with me by email markjudge (@) loadthegame.com only
@@MarkJudgeLTG
Previous Guilty Gear Xrd Sign’s Limited Edition Will be Delayed
Next Binding of Issac: Rebirth to Double in Size with New Expansion