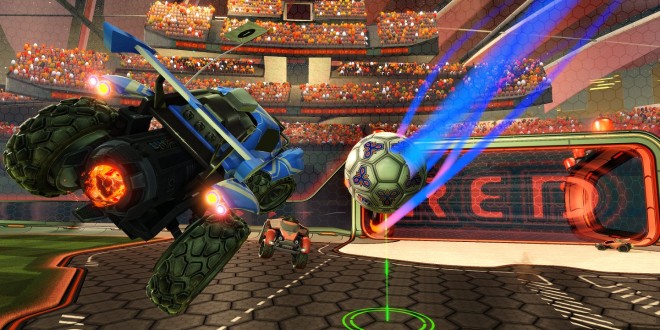 Rocket League to Release on PS4

Rocket League to Release on PS4

Rocket League, the upcoming sports title from developer Psyonix, is the sequel to the PlayStation 3 title Supersonic Acrobatic Rocket-Powered Battle-Cars. Both games combine soccer with racing for high-paced sports action. Now we know which system to expect Rocket League to release for.

On the PlayStation Blog, studio Psyonix released an announcement trailer (seen been below) for Rocket League. In the trailer, it was announced that the game will release on the PlayStation 4. Also on the blog were some of the improvements and new features coming to the game. The title will feature improved physics, faster gameplay, and better visuals. There will be an all-new Season Mode, along with 2-, 3-, and 4-player split-screen. The game will feature more vehicles, stadiums, and more than 100 customization items. The game will have dedicated gameplay servers, and a broadcast-quality replay feature that lets players create replays of entire games from any angle they want.

Supersonic Acrobatic Rocket-Powered Battle-Cars first released on the PS3 in 2008. Battle-cars is a physics based vehicle football game that has players driving cars on a giant field. Players try to score by hitting a ball much larger than the cars into an opposing goal. Much like a game of soccer, each goal counts as a point, with the winning player being the one with the most goals by the time the timer runs out. There are various mini-games and tournaments to play in a single player mode, with player earning up the 5 stars at the end. The game featured various multiplayer maps, and a few different cars that could be unlocked by completing the various mini-games.

I’m Load The Game’s co-founder and community manager, and whenever I’m not answering questions on social media platforms, I spend my time digging up the latest news and rumors and writing them up. That’s not to say I’m all work and no fun, not at all. If my spare time allows it, I like to engage in some good old fashioned online carnage. If it’s an MMO with swords and lots of PvP, I’m most likely in it. Oh, and if you’re looking to pick a fight in Tekken or Mortal Kombat, I’ll be more than happy to assist! Connect with me by email markjudge (@) loadthegame.com only
@@MarkJudgeLTG
Previous Suicide Squad Cast Revealed
Next Get the Sword of Crota in Destiny