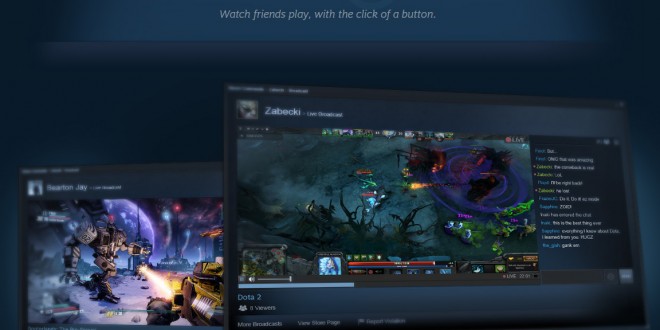 Steam Broadcasting, now in beta, was announced by Valve today. It is Valve’s hope that the ability to watch friends through the expansive Steam community and game store will claim a large stake of the online game streaming market and provide real competition for Twitch and YouTube.

Steam users have been able to watch each other play for a while now, however, with today’s beta version of Steam Broadcasting, you’ll have a variety of privacy options for your own stream and can watch a livestream of your friends gameplay.

You’ll be able to decide whether you want only friends you request to watch your game play or if you would like everybody to peek your gaming shenanigans at any time. And sort of like a digital sports bar, you’ll be able to watch live streams of people tackling the hottest games in the Community hub.

Valve, a massive video game publisher, retailer and developer, made a logical move by offering Steam Broadcasting. With YouTube and Twitch holding the lion’s share of the game live streaming market, it was only a matter of time before Steam threw their hat into the ring. As one of the largest purveyor of games and gaming communities, the appeal of streaming your games without needing outside apps or accounts is very appealing.

Twitch and YouTube’s reactions to Valve’s announcement today should be fascinating to watch, particularly in light of Amazon’s stake in the matter. For those that don’t know, Twitch was acquired by Amazon back in August of this year for $970 million dollars. Yep, that’s right! Twitch was snatched away from Google and into Amazon’s grasp for nearly one billion dollars just a few months ago.

With the livestreaming market becoming a very lucrative offshoot of the gaming industry, it will be interesting to see how the tech heavyweights (Google and Amazon) react to Valve’s addition of Steam Broadcasting. Steam users, how do you feel about the inclusion of Steam Broadcasting as a new option? Do you regularly watch streaming gameplay on services like YouTube and Twitch?

I’m Load The Game’s co-founder and community manager, and whenever I’m not answering questions on social media platforms, I spend my time digging up the latest news and rumors and writing them up. That’s not to say I’m all work and no fun, not at all. If my spare time allows it, I like to engage in some good old fashioned online carnage. If it’s an MMO with swords and lots of PvP, I’m most likely in it. Oh, and if you’re looking to pick a fight in Tekken or Mortal Kombat, I’ll be more than happy to assist! Connect with me by email markjudge (@) loadthegame.com only
@@MarkJudgeLTG
Previous GTA V Bug Lowers Graphic Quality
Next Next Assassin’s Creed Set in London